The JCS said that two Chinese and four Russian warplanes entered the KADIZ, but did not violate South Korea's territorial air.

"Prior to their entry into the KADIZ, our military deployed Air Force fighters to conduct tactical steps in preparation against potential accidental situations," the JCS said in a text message sent to reporters.

At 7:56 a.m., two Chinese H-6 bombers entered the KADIZ from an area 126 kilometers northwest of Ieodo, a submerged rock south of the southern island of Jeju, according to the JCS. They moved toward the East Sea and exited the zone at around 9:33 a.m.

Later, the two Chinese warplanes joined four Russian warplanes, including two TU-95 bombers, and entered the KADIZ together at 9:58 a.m. They then left the zone at 10:15 a.m.

At around 3:40 p.m., four Chinese and two Russian military aircraft were spotted flying in an area some 267 km southeast of Ieodo -- outside the KADIZ -- the JCS said.

The planes' entry into the KADIZ came as South Korea is pushing to strengthen and broaden its alliance with the United States while joining the international condemnation of Russia's invasion of Ukraine.

The entry also coincided with the last day of U.S. President Joe Biden's five-day Asia swing that took him to South Korea and Japan.

During his trip to Tokyo this week, Biden launched the U.S.-led Indo-Pacific Economic Framework and attended the Quad security forum in an apparent move to rally U.S. allies and partners to counter an assertive China.

The air defense zone is not territorial airspace, but is delineated to call on foreign planes to identify themselves so as to prevent accidental clashes. 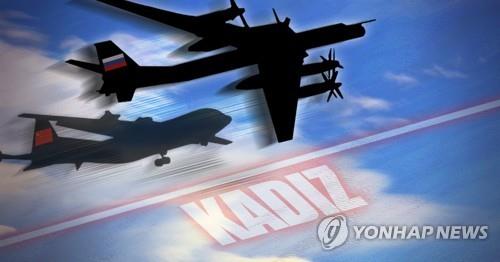