SEOUL, May 25 (Yonhap) -- South Korea's consumption of gasoline and diesel sank more than 18 percent in April from a year earlier due to high international crude prices, data showed Wednesday.

Asia's fourth-largest economy consumed a combined 17.4 million barrels of gas and diesel last month, down 18.3 percent from a year earlier, according to the data from the state-run Korea National Oil Corp.

It was also down 5.8 percent from 18.4 million barrels the previous month.

April's tumble was attributed mainly to soaring international oil prices in the wake of Russia's invasion of Ukraine. In March, crude prices even flirted with US$130 per barrel.

An industry source also said delayed consumption was also responsible as the government was set to cut fuel taxes drastically in May in an effort to ease people's burden from high energy costs.

High international crude costs have sent domestic prices of petroleum products surging. As of Tuesday, a liter of diesel fetched more than 2,000 won ($1.58) on average across the nation, with the per-liter price of gasoline reaching 1,995 won. 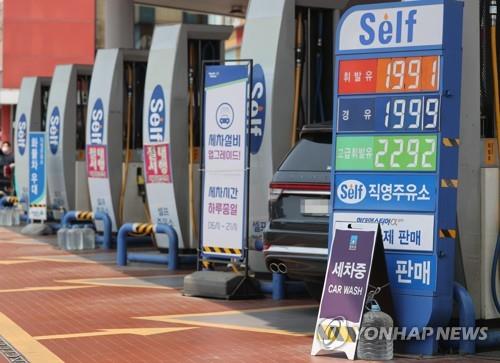