(ATTN: UPDATES with more details throughout)
By Song Sang-ho and Kang Yoon-seung

SEOUL, May 25 (Yonhap) -- Army Gen. Kim Seung-kyum, the deputy commander of the South Korea-U.S. Combined Forces Command (CFC), was named to lead the Joint Chiefs of Staff (JCS), the defense ministry said Wednesday, in the first reshuffle of top military officers since the launch of the Yoon Suk-yeol administration.

The shake-up that affected seven four-star posts was announced just hours after North Korea's launches of three ballistic missiles into the East Sea.

The pick of Kim, steeped in the Seoul-Washington military partnership, appears to reflect the conservative Yoon government's policy priority on reinforcing the alliance in the face of an increasingly provocative Pyongyang, observers said. 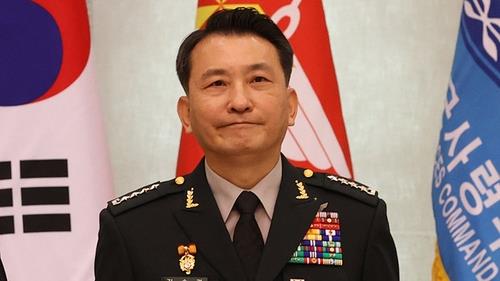 The general will assume the post if he survives the confirmation process of the National Assembly. It has yet to set the date for his confirmation hearing, while lawmakers' formal approval for the pick is not required under a relevant law.

Commissioned as second lieutenant in 1986, Kim has served in various key military posts, including the vice Army chief of staff and the head of the 3rd Corps.

If appointed, Kim would replace the current JCS chairman, Air Force Gen. Won In-choul, and become the first graduate of the Korea Military Academy to lead the JCS in nine years.

"On the occasion of this reshuffle, we will focus on constructing a strong military based on science and technology that would undergird freedom, peace and prosperity, while maintaining a firm readiness posture," a ministry official told reporters.

All of the currently three-star officers will be promoted to four-star rank to take up their designated posts.