SEOUL, May 25 (Yonhap) -- A dog farm owner has been arrested and indicted on accidental homicide and other charges in connection with the death of a woman who was mauled to death by one of his dogs on the eastern outskirts of Seoul last year, prosecutors said Wednesday.

The tragic incident occurred on May 22 last year, when the 57-year-old victim taking a stroll on a hill in Namyangju, about 20 kilometers east of Seoul, was attacked and killed by a large, mixed-breed dog that had escaped from the suspect's farm. The woman died of excessive bleeding a few hours after the 150-centimeter-long and 30-kilogram dog bit her neck. 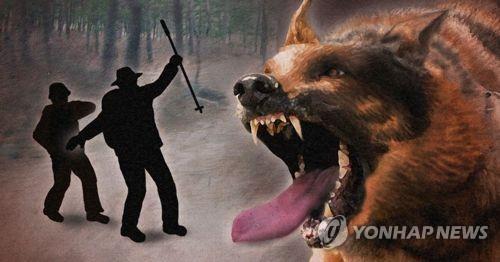 At that time, police conducted an extensive investigation to find the dog's owner and found that the 69-year-old suspect was illegally breeding 49 abandoned dogs at a nearby farm. In July, police sought an arrest warrant for the suspect but a local court rejected the request, saying he denied ownership of the killer dog.

The prosecutors in Namyangju, who took over the case from police, have conducted a thorough supplementary investigation into the suspect and relevant figures before arresting and indicting him exactly one year after the incident. The arrest warrant for the suspect was approved by the court on May 13.

The dog farm owner was indicted on four charges, which also include violations of the Veterinarians Act and Wastes Control Act, and evidence tampering. Prosecutors said the suspect had injected antibiotics into his dogs without a veterinarian's license and provided food waste to them as food.

The killer dog was captured soon after the incident and has since been under the protection of the municipality at a dog training center. Prosecutors have requested that the dog be preserved at the center until the end of the suspect's court trials. The suspect's dog farm has been voluntarily closed.

The case drew strong media attention amid growing public criticism on attacks by stray dogs on humans and other animals.

Prosecutors said they will sternly deal with those caught violating animal farm and safety related regulations to prevent dog attack incidents from reoccurring.