(ATTN: UPDATES with details of a press release from the U.S. Department of Defense in paras 5-10; CHANGES dateline)
By Song Sang-ho and Kang Yoon-seung

SEOUL/WASINGTON, May 25 (Yonhap) -- The defense chiefs of South Korea and the United States stressed the need for the deployment of America's strategic military assets here and the early resumption of a key deterrence dialogue during a phone call Wednesday, Seoul's defense ministry said.

"The minister and secretary agreed to further strengthen the combined defense posture between South Korea and the U.S. and further reinforce the U.S.' extended deterrence," the ministry said, referring to Washington's commitment to providing a full range of its military capabilities to defend its ally.

"They also emphasized the need for the deployment of U.S. strategic military assets and the early resumption of the Extended Deterrence Strategy and Consultation Group (EDSCG) in preparation against the possibility of additional North Korean provocations," it added.

The U.S. Department of Defense later said Austin and Lee agreed to remain in close contact "on response options."

"Both leaders agreed to remain in close contact on response options, further discuss trilateral security cooperation with Japan, and continue their efforts to achieve the complete denuclearization of the Korean Peninsula," it said in a press release.

"The two leaders strongly condemned today's missile launches and pledged to work closely together to address the serious threat the DPRK's provocative actions pose to the peace and stability of the Korean Peninsula, the region, and the global community more broadly," it added.

"Secretary Austin reaffirmed the ironclad U.S. commitment to the defense of the ROK and the capability of the U.S.-ROK Alliance to respond to any DPRK aggression," said the press release, referring to South Korea by its official name, the Republic of Korea.

During the summit with President Yoon Suk-yeol in Seoul on Saturday, U.S. President Joe Biden reaffirmed the U.S.' commitment to deploying its strategic military assets "in a timely and coordinated manner as necessary."

Yoon and Biden also agreed to reactivate the high-level EDSCG. The dialogue channel was suspended in 2018, but the Yoon administration has sought to restore it to enhance the credibility of extended deterrence.

In the phone call, Lee and Austin also strongly condemned the latest missile launches, stressing they are a violation of U.N. Security Council resolutions and a significant provocation that threatens peace and stability on the Korean Peninsula and beyond, according to the ministry. 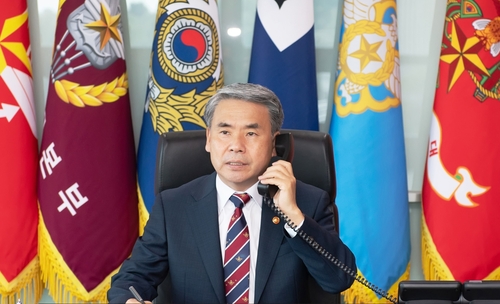