SEJONG, May 25 (Yonhap) -- South Korea's oceans minister said Wednesday that his country will not lift a ban on imports of seafood from Japan's Fukushima area for the sake of winning Japan's support for the country's push to join a major free trade agreement.

Seoul decided to join the Comprehensive and Progressive Agreement for Trans-Pacific Partnership (CPTPP), which involves 11 nations, including Japan and Australia, and has been working on due domestic procedures to submit an application.

Japan has been reluctant to Seoul's entry, as South Korea has banned all seafood imports from Japan's Fukushima areas since 2013 on concerns over their radiation levels following the 2011 Fukushima nuclear power plant meltdown.

"We've taken a resolute stance on the issue. We aren't considering allowing imports of Japan's Fukushima seafood as a tactic to get backing for our bid to join the CPTPP," Oceans Minister Cho Seung-hwan said during a meeting with reporters.

Cho earlier said the issue regarding regulations on the fishery products is directly linked to the health and safety of the people so that it is not a matter being discussed under any international customs agreements. 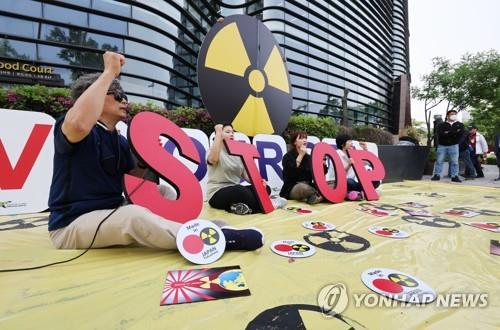 Cho said he understood the government's push for the CPTPP for the national interest despite expected damage to the domestic fishing industry, and vowed to make "adequate compensation" for the affected people and to make the case as a chance for "innovative changes" in the field.

As for the now-expired fisheries agreement between Seoul and Tokyo, the minister vowed efforts to resume negotiations despite stark differences in their stances amid diplomatic rows stemming from Japan's 1910-45 colonial rule of the Korean Peninsula.

The bilateral fisheries agreement has not been renewed after expiring in 2016, as the two sides failed to narrow the gap on fishing quotas and other issues.

Officials here have said that Japan's demand is closely related to South Korea's sovereignty over its easternmost islets of Dokdo in the East Sea.

"Japan has not been quite active in resuming talks on the agreement," Cho said. "We will continue efforts to make progress on the matter and to develop the bilateral relations in a future-oriented fashion."

Asked about the possible privatization of the country's leading shipper HMM Co., Cho said there are many issues that must be considered.

"It is true that HMM has been on track, but more investment is needed. We don't think of its privatization for now, as the matter should be decided after taking into account various factors such as the COVID-19 pandemic, logistics issues between the United States and China and other economic issues," he said.

HMM, formerly known as Hyundai Merchant Marine, was taken over by the state-run Korea Development Bank (KDB) in 2016 after the company suffered huge losses amid an extended industry slump. Currently, the KDB and the state-run Korea Ocean Business Corp. (KOBC) jointly run HMM.

There have been calls for its swift privatization, given the recent improvement in the global shipping industry and the company's stellar performance.

Earlier this month, HMM reported 3.13 trillion won (US$2.47 billion) in net profit for the first quarter, which was up nearly twentyfold from a year earlier. 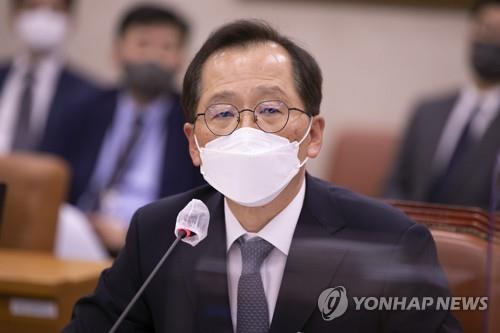