SEOUL, May 26 (Yonhap) -- South Korea's central bank hiked its key policy rate by a quarter percentage point Thursday, as it predicted inflation in 2022 could hit the highest level in 14 years amid soaring oil and commodity prices.

Rhee Chang-yong, chief of the Bank of Korea (BOK), hinted at further rate hikes, saying the central bank is concerned more about inflation than growth and that it will carry out its monetary policy for months to come in order to get prices under control.

As widely expected, the BOK's monetary policy board voted to increase the benchmark seven-day repo rate to 1.75 percent at a rate-setting meeting held early in the day, according to the central bank.

This marked the third rate hike this year after 0.25 percentage-point increases in both January and April. It also represented the fifth rise since August last year when the central bank began rolling back its easy monetary policy put in place for about two years to bolster the pandemic-affected economy.

In a separate decision, the BOK revised upward its inflation outlook for this year to 4.5 percent from 3.1 percent projected three months earlier. The forecast, if proved, could be the fastest price growth since 2008, when prices grew 4.7 percent.

"At this point, our expectation is that inflation could have more of a negative ripple effect than growth. As such we need to respond in a preemptive manner," Rhee told a press conference after the rate increase decision.

"If the central bank loses the chance for policy reaction, then it could increase expectations of inflation and end up raising prices, eventually lowering real incomes and deepening financial instability," he added. "As a result, it could have more far-reaching damage to at-risk people in the mid- and long-term period."

He said the rate hike decision was made "unanimously." 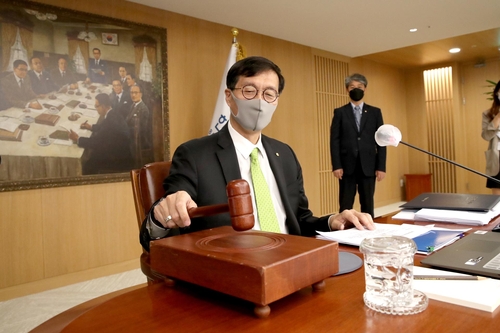 Thursday's rate hike came as the country is grappling with high-rise inflation pushed up by soaring oil, energy and other major commodity prices amid the protracted Russia-Ukraine war that has exacerbated the global supply chain disruptions.

Rhee said that inflation could peak later in the year, not in the first half as previously predicted, adding that price growth could stay in the 4 percent range until early next year.

South Korea's economy has been on a recovery track thanks to robust exports, and expectations are growing for a rise in consumption thanks to recently eased social distancing rules amid a letup in coronavirus infections.

But as the economy is facing growing uncertainty at home and abroad, a rise in borrowing costs is feared to undercut economic growth and possibly tip the economy into a recession.

"The board sees it as warranted to conduct monetary policy with more emphasis on inflation for some time, as the Korean economy is expected to continue its recovery and inflation to run above the target level for a considerable time, despite underlying uncertainties in domestic and external conditions," the BOK said in a statement.

"In this process the board will judge when to further adjust the degree of accommodation while thoroughly assessing the trends of growth and inflation, the risk of a buildup of financial imbalances, monetary policy changes in major countries, and external economic conditions including geopolitical risks," it added.

Along with inflation woes, the BOK has also been under pressure to raise its rate as the U.S. Federal Reserve hiked its interest rate by a "big-step" 0.5 percentage point early this month to the 0.75-1 percent range and hinted at further increases down the road as part of monetary policy tightening to tame runaway inflation.

The Fed's hawkish monetary policy stance has spawned worries here that the spread in borrowing costs between the two countries could reverse in the months to come and spark a massive capital outflow from South Korea and further weaken the local currency against the dollar. A weak currency could increase upward inflation pressure by making imports more expensive.

Rhee said it is possible that the U.S. interest rate could be raised higher than South Korea's given that Washington is confronting a more urgent task of stabilizing prices with its economic growth staying on a more solid footing. He noted that even if a reversion takes place, the South Korean economy is able to tide over challenges.

He reiterated his earlier stance that all possibilities in monetary policy, including a big rate hike, are on the table, saying monetary policy decisions will be made based on analysis of diverse updated economic data.