SEOUL, May 26 (Yonhap) -- The Constitutional Court on Thursday ruled in favor of the country's penal law that criminalizes workers, who undertake illegal labor strikes, on the grounds that such strikes obstruct business.

The court delivered the ruling in a 4-5 decision over a petition filed after 18 temporary workers at Hyundai Motor Co.'s factory in Jeonju were convicted of business obstruction for refusing to work on weekends in a 2010 strike they launched following the firm's decision to lay them off.

The court at that time ruled the striking workers' refusal to work on weekends en masse constituted the use of "force," although the walkout did not involve any form of violence, such as sabotage.

Some of the convicted workers filed a constitutional petition in 2012, challenging an article of the Criminal Act, based on which they were convicted.

The Article 1 of Clause 314 of the act mandates a prison sentence of up to five years or a fine of 15 million won (US$11,834) for those who obstruct the business of others through means of force. The article has been often used to criminally punish those who stage an illegal labor strike.

On Thursday, the Constitutional Court ruled that the article does not infringe upon workers' right to collective action because it only criminalizes unpredictable collective work refusal causing serious confusion and large damage to the employers.

The ruling came 10 years after the lawsuit was filed, making the case the longest-pending one in the Constitutional Court's history. The guilty sentences for the striking workers were later finalized by the Supreme Court while the case was pending. 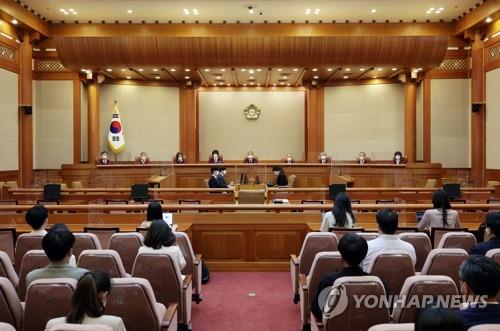