SEOUL, May 26 (Yonhap) -- Starbucks Korea said Thursday it has opened its first store inside a subway station in Seoul as part of its expansion strategy in Asia's fourth-largest economy.

The new branch opened inside Gangnam Station in a posh neighborhood in southern Seoul on May 12. It is designed to offer quick service to rush-hour commuters and is the first physical store by the U.S. coffee chain to open in an underground subway station in South Korea.

Gangnam -- which gained global attention thanks to rapper Psy's 2012 mega hit "Gangnam Style" -- is one of the busiest subway stations in South Korea with about 100,000 commuters a day.

Seoul Metro does not prohibit passengers from consuming drinks or food on the train but recommends they refrain from doing so as people are required to wear masks due to COVID-19, said Park Jeong-min, assistant manager on Seoul Metro's press team.

South Korea lifted the outdoor mask mandate earlier this month, but people are required to wear masks indoors, including on the subway and other public transportation.

The only other Starbucks location operating inside an underground station is at Canary Wharf station in London.

"At this point, the company has no plans to consider expanding to more underground locations or take-out only stores," a spokesperson for the coffee chain said.

There are 19 Starbucks stores within a roughly 500-meter radius of Gangnam Station.

Currently, Starbucks operates 1,674 stores in South Korea. The coffee chain entered the country in 1999 and earned 602.1 billion won (US$475.8 million) in sales in the January-March period, up 15 percent from a year earlier.

Since its stake acquisition last July, South Korean discount retailer emart is the largest shareholder of Starbucks Korea, owning 67.5 percent of its shares. 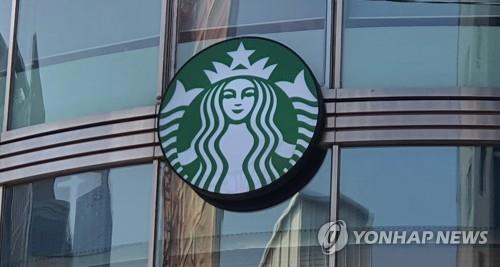