In a statement, Seoul's foreign ministry took a thinly veiled swipe at China and Russia, two permanent members of the 15-state panel, for opposing the U.S.-led push. The two exercised their veto power in the 13-2 vote during a session held in New York on Thursday (local time).

"(The government) expresses deep regret that the new Security Council resolution has not been adopted despite the approval of most members," its spokesperson Choi Young-sam said.

He pointed out that North Korea has continued the provocations of ballistic missile launches even amid the possibility of another nuclear test.

It marked the first time that a UNSC resolution on North Korea sanctions has been voted down, he noted and added that it "undermined the international community's confidence" in the U.N. council.

He urged members of the powerful panel to play a "responsible role" in responding to North Korea's violation of U.N. resolutions in place and supporting efforts for its denuclearization. 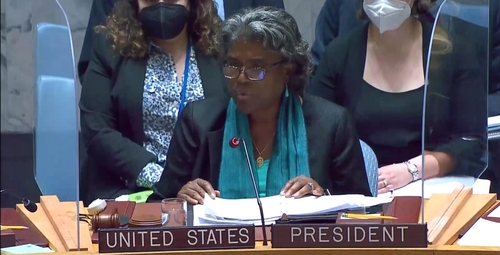 "With the adoption of this resolution, we can send a message to all proliferators that we will not stand for their actions that seek to undermine international peace and security," U.S. Ambassador to the U.N. Linda Thomas-Greenfield said, ahead of the vote.

But China's U.N. Ambassador Zhang Jun reportedly made clear Beijing's opposition to any attempt to create confrontation or tension in Northeast Asia.

"We do not think additional sanctions will be helpful in responding to the current situation," he told reporters in New York earlier in the day, according to an AP report.

Thomas-Greenfield earlier said China and Russia, which traditionally have close ties with North Korea, have blocked "every attempt to enforce and to update DPRK sanctions" over the past four years, allowing the recalcitrant country to continue its "unlawful" activities.

"These countries' attempt to defend the DPRK should not go unnoticed by this council or the world," Thomas-Greenfield has said.