The Navy SEAL-turned-YouTuber arrived at Incheon International Airport, west of Seoul, at around 7:30 a.m., about three months after he left for Ukraine to join the Russia-Ukraine war as a volunteer fighter.

Rhee has said via his YouTube channel that he recently sustained injuries during combat in Ukraine. He did not specify what the injuries were but said they are not serious and months of rehabilitation treatment is required.

Police plan to investigate him over passport law violation charges after his health improves as he traveled to the war-stricken country in defiance of the country's travel ban to Ukraine.

In a Twitter post a week earlier, Ukraine's International Legion of Territorial Defense said Ken Rhee who "sustained injuries on the battlefield ... will return home for rehabilitation," calling him by his English name. 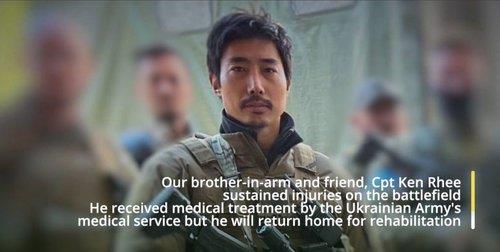