SEOUL, May 27 (Yonhap) -- The candidates of the ruling and the main opposition parties are running neck and neck in a race for the governorship of Gyeonggi Province, one of the biggest battlegrounds in next week's local elections, the latest polls showed Friday.

Support for former Finance Minister Kim Dong-yeon of the main opposition Democratic Party (DP) was 39.1 percent, only 1.4 percentage points higher than that of his ruling People Power Party (PPP) rival Kim Eun-hye, according to a poll of 14,020 voters nationwide.

Their gap was within the poll's margin of error of plus or minus 3.1-3.5 percentage points.

The survey was commissioned by three major TV stations, KBS, MBC and SBS, and conducted jointly by Korea Research International, Hankook Research and Ipsos from Monday to Wednesday just before public opinion polls were prohibited Thursday.

Another poll of 800 people conducted over the same period by KSTAT Research also showed the opposition's Kim slightly ahead with 45.2 percent support against the ruling party candidate's 44.3 percent. The 0.9 percentage-point gap was within the margin of error of plus or minus 3.5 percentage points.

But in a two-day poll of 804 voters in the Gyeonggi area conducted by Research & Research through Wednesday, the PPP's Kim led the DP's Kim 43.8 percent to 36.4 percent, with a gap of 7.4 percentage points.

The poll's margin of error is plus or minus 3.5 percentage points.

All three polls have a 95 percent confidence level. 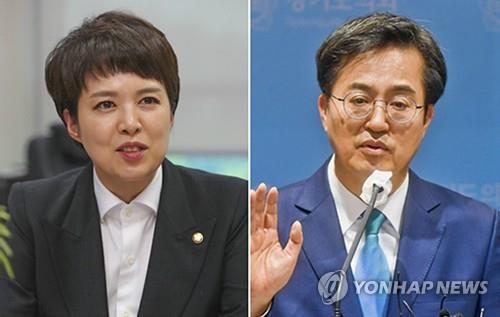