SEOUL, May 27 (Yonhap) -- South Korea's top no-frills airline Jeju Air Co. and other key industry players are on course to bounce back from a yearslong slump on the back of rising international travel demand, a local brokerage house said Friday.

Jeju Air, Jin Air Co., T'way Air Co. and other low-cost carriers have been laboring through a severe slump for the past four years in the wake of a global economic slowdown, sluggish ticket sales on their routes to Japanese cities and the fallout from the coronavirus pandemic.

"The three low-cost airlines seem to be entering into a new phase of opportunity after passing through the worse period, given their capital increases and a possible recovery in international flights," IBK Investment & Securities Co. said in a statement.

Those carriers are expected to turn around as demand for international travel is expected to remain high till the end of 2023 in line with a gradual increase in the number of air travelers, it added. 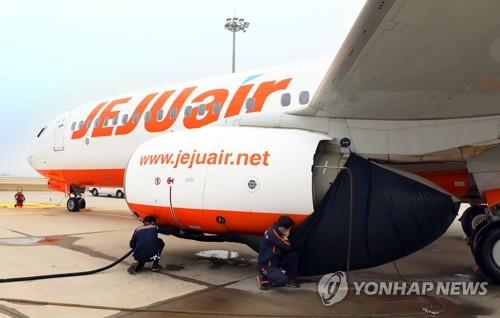 South Korean budget carriers have been expanding their international flight services in the wake of eased coronavirus restrictions at home and abroad.

After initial public offerings, the three no-frills carriers made splashes in the local stock market, but they have taken a big hit from the triple whammy. Jeju Air got listed on the local bourse in 2014, with Jin Air and T'way Air making stock market debuts in December 2018 and August 2018, respectively.

Since the COVID-19 outbreak in South Korea in early 2020, the three airlines have received a combined emergency cash injection of 1.1 trillion won (US$875 million) in a desperate bid to remain afloat.

IBK Investment & Securities forecast Jeju Air to pull off a sharp turnaround next year, with its revenue likely to more than double to 1.6 trillion won. The airline is projected to switch to an operating profit of some 150 billion won in the coming year.

Jin Air, the budget carrier unit of leading full-service airline Korean Air Lines Co is expected to switch to an operating profit from the fourth quarter of this year, with sales from international flights soaring to around 821 billion won in 2023 from 276 billion won this year.

T'way Air is also projected to swing to an operating profit from the October-December period this year on increased revenue from international routes and chalk up a record operating income next year, the brokerage house said.
(END)

Budget carriers set to take off after long slump: brokerage

Budget carriers set to take off after long slump: brokerage