SEOUL, May 29 (Yonhap) -- President Yoon Suk-yeol on Sunday congratulated director Park Chan-wook and actor Song Kang-ho on winning the best director and the best actor awards at the Cannes Film Festival, saying the prizes confirmed the competitiveness of the Korean movie industry.

In a message to Park, Yoon praised the director's Cannes-winning movie "Decision To Leave," saying it "again confirmed the Korean movie's unique originality and outstanding competitiveness."

In a separate message, Yoon told Song that the best actor award "raised our pride in Korean culture and art by one level and was a great comfort to the people who were tired of COVID-19."

Song won the award for the movie "Broker," which was directed by the Cannes-winning Japanese filmmaker Hirokazu Kore-eda.

Yoon also paid his respect to the director, actors and staff of "Broker" for their work.

It is the first time in the country's cinema history that Korean films have taken home two titles at a time at Cannes. 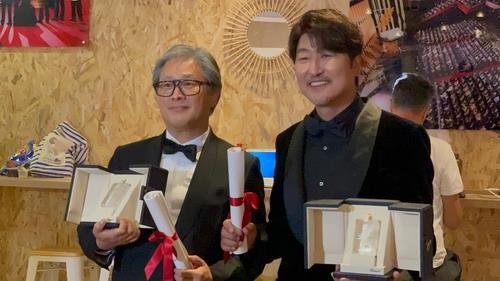