SEOUL, May 31 (Yonhap) -- South Korea's health authorities on Tuesday said that it plans to place monkeypox in the second level of contagious diseases, out of a four-tier scheme, as monkeypox is spreading fast around the globe, though it has not yet been detected here.

The country has been vigilant against a potential inflow of the monkeypox virus as an increasing number of countries have recently reported cases of the virus traditionally confined to regions in Africa.

The Korea Disease Control and Prevention Agency (KDCA) said that the agency doesn't rule out the possibility of an influx of the monkeypox virus amid an increase in international travel on the back of eased COVID-19 rules and the incubation period of the virus.

Currently, the coronavirus, cholera and other contagious diseases are grouped here as the second-highest one, and outbreaks of the diseases are reported within 24 hours.

South Korea lowered the level of the COVID-19 disease to the second-highest last month from the highest one as the pandemic shows signs of receding.

According to health authorities, a total of 473 confirmed cases and 136 suspected cases of monkeypox infections have been reported in 31 countries, including in Europe, the Middle East, the United States and Australia.

The virus has traditionally been confined to countries in Central and West Africa, and symptoms include fever, chills, rashes and lesions.

South Korea has yet to report an occurrence of the virus. The KDCA said South Korea established a testing scheme for monkeypox in 2016.

The KDCA said earlier that South Korea has a vaccine stockpile sufficient to inoculate 35 million people against the monkeypox virus. 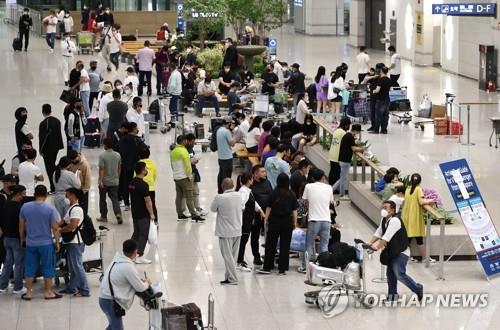