SEOUL, June 1 (Yonhap) -- South Korea's exports rose 21.3 percent in May from a year earlier on solid demand for chips and petroleum products, but the country suffered a trade deficit due to high global energy prices, data showed Wednesday.

Outbound shipments stood at US$61.52 billion last month, up from $50.73 billion a year earlier, according to the data compiled by the Ministry of Trade, Industry and Energy.

It is the highest tally for any May since the ministry began compiling related data in 1956. The previous record was set a year earlier.

It is also the second-largest ever monthly figure following the record number of $63.79 billion set in March 2022, the data showed.

May marked the 19th consecutive month that the country's exports have logged an on-year expansion. Exports also posted double-digit growth for the 15th month in a row last month.

But high global energy prices amid the crisis surrounding Ukraine also pushed up the country's imports last month, leading the country to suffer a trade deficit for the second consecutive month.

Initially, the government said the country had a trade deficit in March, citing its preliminary data, but its revised data showed a trade surplus of $210 million that month.

South Korea depends on imports for most of its energy needs, and the country's energy imports spiked 84.4 percent on-year to $14.75 billion in May, the ministry said. 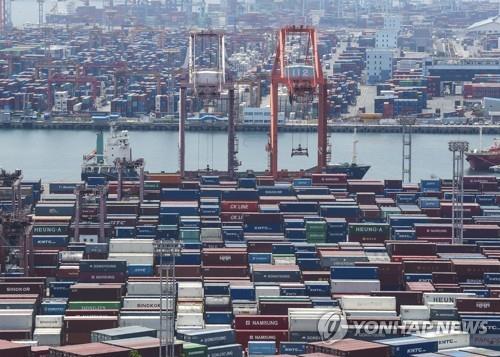 Overseas demand for the country's key export items hit an all-time monthly high in May amid a global economic recovery to lead the overall exports growth.

Sales of semiconductors grew 15 percent to $11.55 billion and those of petroleum products surged 107.2 percent to $6.4 billion in May.

By nation, exports to the United States, the European Union, the Association of Southeast Asian Nations (ASEAN) and India reached a record high for any May ever.

Shipment to China also inched up 1.2 percent on-year to stand at $13.41 billion, a turnaround from an on-year fall the previous month, despite the lockdown of Shanghai and other major cities over the fast spread of COVID-19.

But exports bound for the Commonwealth of Independent States (CIS) sank 37.9 percent to $680 million in May due to the Russia-Ukraine war, the ministry said.

Of them, sales in Russia tumbled 59.4 percent and those in Ukraine sank 80.7 percent.

"In the face of global uncertainties and concerns over a trade deficit, the government will focus on lifting regulations and pushing for new trade measures so as to ensure stable supply chains and to help our companies boost investment and innovation," he added.