SEOUL, June 1 (Yonhap) -- The ruling People Power Party (PPP) was projected to win 10 of the 17 metropolitan mayoral and gubernatorial posts, including Seoul mayor, in Wednesday's local elections, according to a joint exit poll by three major TV broadcasters.

The main opposition Democratic Party (DP) was expected to grab four posts, including the governorships in the Jeolla provinces, according to the poll conducted by KBS, MBC and SBS.

Three races, including the contest for Gyeonggi governor and mayoral elections for Daejeon and Sejong, were too close to call.

In a separate exit poll by broadcaster JTBC, the PPP was projected to win nine metropolitan mayoral and gubernatorial posts against the DP's four, with four races too close to call.

Being contested in this year's local elections are 17 metropolitan mayoralties and provincial governorships, 226 lower-level administrative leadership positions, as well as 872 seats in provincial and metropolitan councils, and 2,988 in lower-level local councils.

The elections came less than a month after President Yoon Suk-yeol took office. 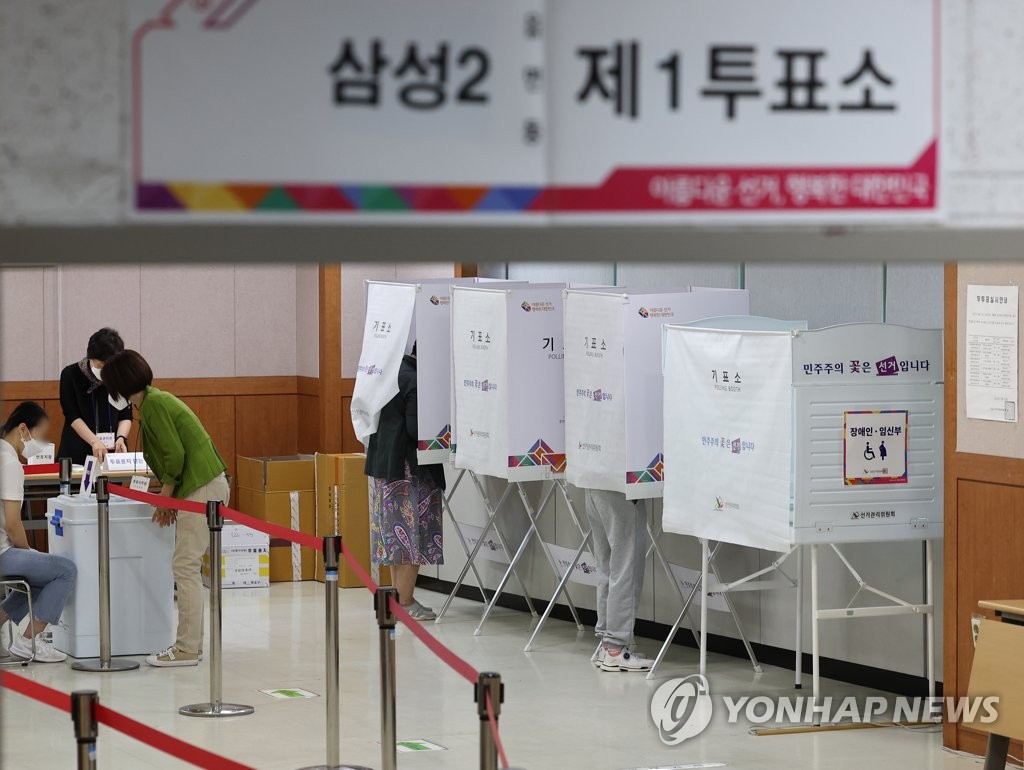 Of the key battlegrounds, Seoul Mayor Oh Se-hoon of the PPP was projected to win reelection by garnering 58.7 percent of the vote against Song Young-gil of the DP with 40.2 percent, according to the KBS-MBC-SBS exit poll.

In the Gyeonggi governor race, Kim Eun-hye of the PPP and Kim Dong-yeon of the DP were in a dead heat with the exit poll forecasting the former to win 49.4 percent against the latter's 48.8 percent.

Ahn of the PPP, who withdrew from the presidential race to endorse Yoon, was expected to clinch the seat representing the Bundang-A district of Seongnam, just south of Seoul, by winning 64 percent of the vote against DP's Kim Byoung-gwan with 36 percent, according to the exit poll.

Lee of the DP, who lost to Yoon in the March 9 presidential election only by a razor-thin 0.73 percentage-point gap, was projected to win the seat in the Gyeyang-B district in Incheon, west of Seoul, by taking 54.1 percent of the vote against PPP's Yoon Hyun-sun with 45.9 percent.

Should the exit poll predictions stand, the results are expected to boost the mandate of the new government of President Yoon in its first years.