SEOUL, June 1 (Yonhap) -- Leaders of the ruling People Power Party (PPP) eurpted in cheers as TV exit polls projected the party's resounding victory in Wednesday's local elections, a result that is expected to strengthen the mandate of the newly inaugurated government of President Yoon Suk-yeol.

On the other hand, silence descended on the headquarters of the main opposition Democratic Party as a joint exit poll by TV stations KBS, MBC and SBS showed that the party was projected to win only four of the 17 key races for mayors and provincial governors against the PPP's 10.

The other three races, including the contest for Gyeonggi governor and mayoral elections for Daejeon and Sejong, were too close to call, although the exit poll showed the PPP candidates holding narrow leads. 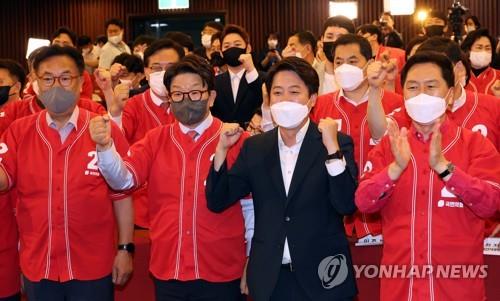 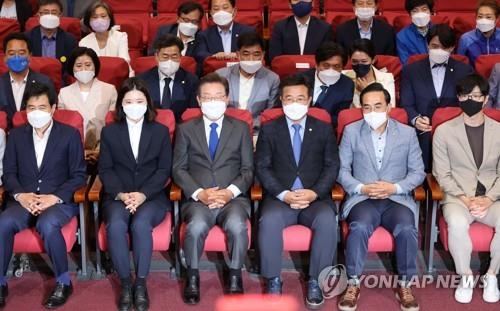 After the results were announced, PPP leaders and lawmakers shouted out "We won!," clapping with wide grins, at the party's situation room set up at the National Assembly Library.

"We are deeply grateful for all the support the people have given us," PPP Chairman Lee Jun-seok said. "More than anything else, we are grateful that we were given a chance to take over a considerable part of regional administration following the presidential election victory."

The DP leadership, however, was silent in shock at the projected result that indicated it could suffer a crushing defeat, contrary to the sweeping victory in previous local elections held in 2018 when the liberal party swept 14 out of 17 key races.

"The results are worse than we expected. It is very disappointing," Park told reporters as she left the situation room.

If the exit poll predictions stand, the results are expected to boost the mandate of the new government of President Yoon Suk-yeol in its first years and expand PPP's presence across the nation, while weakening DP's power to keep the ruling bloc in check.