WASHINGTON, June 1 (Yonhap) -- U.S. Secretary of State Antony Blinken on Wednesday urged China to work with the U.S. and the rest of the international community insisting that China can play a major role when it comes to global issues such as climate change and North Korea.

His remarks come less than a week after China and Russia blocked a U.S.-proposed U.N. Security Council resolution seeking to impose fresh U.N. sanctions on North Korea for its recent missile provocations.

"China has a tremendous ability to use its power, its influence to productive events," the top U.S. diplomat said in a virtual event marking the 100th anniversary of the establishment of Foreign Affairs Magazine.

Blinken noted China could be a "major player" in bringing the COVID-19 pandemic to an end by helping build a "more agile global health security system that includes better real time exchange of information." 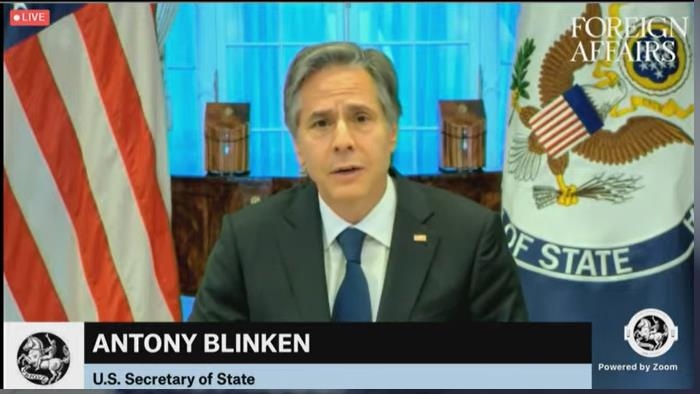 Beijing and Moscow vetoed the U.S.-proposed U.N. Security Council resolution on North Korea on Thursday, effectively blocking the resolution supported by all 13 other members of the 15-member council, arguing it would only increase tension in the region and that the U.S. should instead engage with Pyongyang.

Washington has consistently made it clear to Pyongyang that it remains committed to dialogue without preconditions, but the North remains unresponsive to U.S. overtures.

Blinken said the U.S. will continue to work with its allies to create an environment that encourages China to act.

"What we can do is shape the environment in which it makes those decisions, and that's what the strategy that we put forward is all about, particularly when it comes to aligning with allies and partners," he added.

Blinken highlights need to work with China on global issues including N. Korea

Blinken highlights need to work with China on global issues including N. Korea