On Wednesday, LaCamera paid a courtesy call on Japan's State Minister of Defense Makoto Oniki and met with Gen. Koji Yamazaki, the chief of staff of Japan's Joint Staff, according to tweets by the Japanese military.

His trip to Japan came as South Korea and the United States are seeking to beef up security coordination against North Korea's military provocations, with both underscoring the importance of trilateral cooperation with Japan.

"In the meeting, they shared the awareness of security environment in Korean Peninsula, including a series of missile launch by DPRK, and reaffirmed the importance of JPN-U.S.-ROK cooperation," Japan's Joint Staff tweeted, referring to talks between LaCamera and Yamazaki.

LaCamera leads the USFK, the United Nations Command (UNC) and the South Korea-U.S. Combined Forces Korea. The previous day, he briefed visiting South Korean military officers on the roles of the UNC rear bases in Japan. 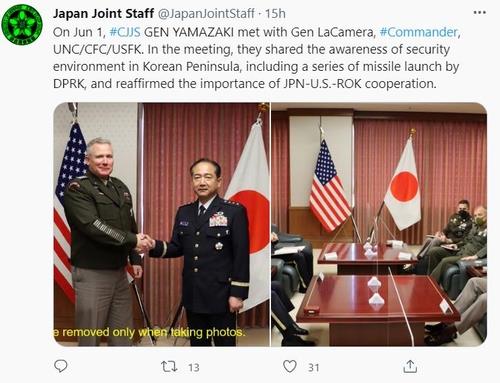