BUSAN, June 2 (Yonhap) -- The city of Busan allowed a branch of Lotte Department Store to reopen Thursday after the two sides settled a dispute over a delayed landmark construction project.

Lotte's Gwangbok branch store in the southern port city closed Wednesday as the metropolitan government did not extend its business license the previous day, citing the company's reluctance to carry out a plan to construct a related commercial and residential building called Lotte Tower.

After further negotiations, the two sides on Thursday signed an agreement, under which Lotte will complete the construction of the skyscraper by 2025, one year earlier than its latest plan.

In exchange, the city extended the license. But it is effective only for four months, while such extension is usually valid for one or two years. 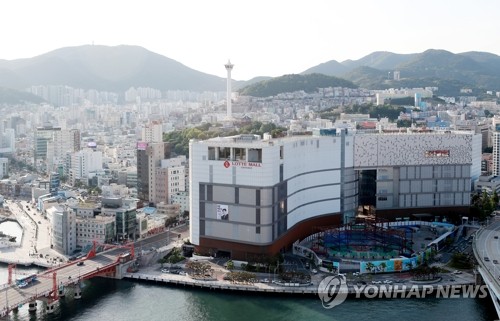 Lotte Shopping CEO Jung Joon-ho apologized for the delay in the project.

"We will do our best to complete the development of Lotte Tower as a priority task of the group," he said during the signing ceremony. Busan Mayor Park Hyeong-joon also attended the event.

In 2000, Busan approved the company's plan to build Lotte Tower, which would be a 107-story, 428-meter-high skyscraper.

In 2009, the city government also gave a provisional permit to the Gwangbok branch store as part of the project.

But the project made little progress due to feasibility problems, and Lotte changed Lotte Tower's design in 2019, scaling it down to a 56-story, 300-meter structure.

The revised plan was rejected by the city's landscape review panel the following year.

Lotte recently submitted a new design with a height of 340 meters with a plan to complete the construction by 2026, and the panel conditionally approved the plan on May 26.
(END)