The combined outstanding loans of the country's five first-tier lenders, including KB Kookmin, Shinhan, Hana, NH and Woori, totaled 701 trillion won (US$560 billion) in end-May, down 1.33 trillion won from a month earlier, the banks' data showed.

Their monthly balance of household loans has dropped since January. The tally showed speedier contraction in end-May, compared with the 802 billion won on-year drop in end-April.

"We are seeing an inflow of cash that was originally invested in securities and cryptocurrencies. Many customers prefer to make early repayments of their debts," a bank source said. "The real estate market also seems to have lost steam, getting people to take out fewer loans," the source added. 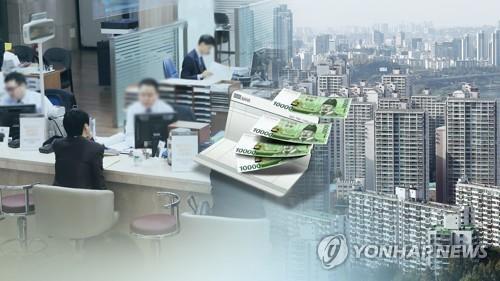 Of the total household loans, the combined outstanding household mortgages extended by the five banks had totaled 506.7 trillion won as of end-May, down 524.5 billion won from a month earlier, data showed. The monthly mortgage balance had shrunk every month since March.

The combined outstanding balance of credit loans had stood at 131.8 trillion won as of end-May, down 661.3 billion won from a month ago. The tally had contracted for the six straight months since December 2021.