SEOUL, June 2 (Yonhap) -- South Korea dropped to Brazil 5-1 in a pre-World Cup friendly match at home Thursday, thoroughly outclassed by the top-ranked team in front of a sellout crowd.

Neymar, shaking off a right foot injury sustained during training from the previous day, converted two penalties for Brazil at Seoul World Cup Stadium, where 64,872 fans were left in awe of the dazzling display of the South American's skills.

Richarlison had the match's first goal for Brazil six minutes into the match, while Hwang Ui-jo had the lone South Korean goal, his first international score since last June. Second-half subs Philippe Coutinho and Gabriel Jesus also scored for the winning side.

South Korean captain Son Heung-min, the joint Golden Boot winner in the Premier League, was held off the score sheet, though he did take a couple of hard shots at goalkeeper Weverton.

South Korea have managed just one win and six losses in seven matches so far against Brazil, the lone victory having come in 1999.

"It was a fair defeat, a fair result," South Korea head coach Paulo Bento said. "We need to fix a lot of things, of course. We made a lot of mistakes, some of them unforced. It's important (that) we analyze the game. And after that, totally forget about this game and try to prepare for the next one."

Bento's Brazil counterpart, Tite, said keeping Son in check was a key to his side's victory.

"He is a skilled player who can create dangerous moments, and we tried to defend him as much as we could," Tite said. "That he scored 23 goals in the Premier League shows the kind of player he is." 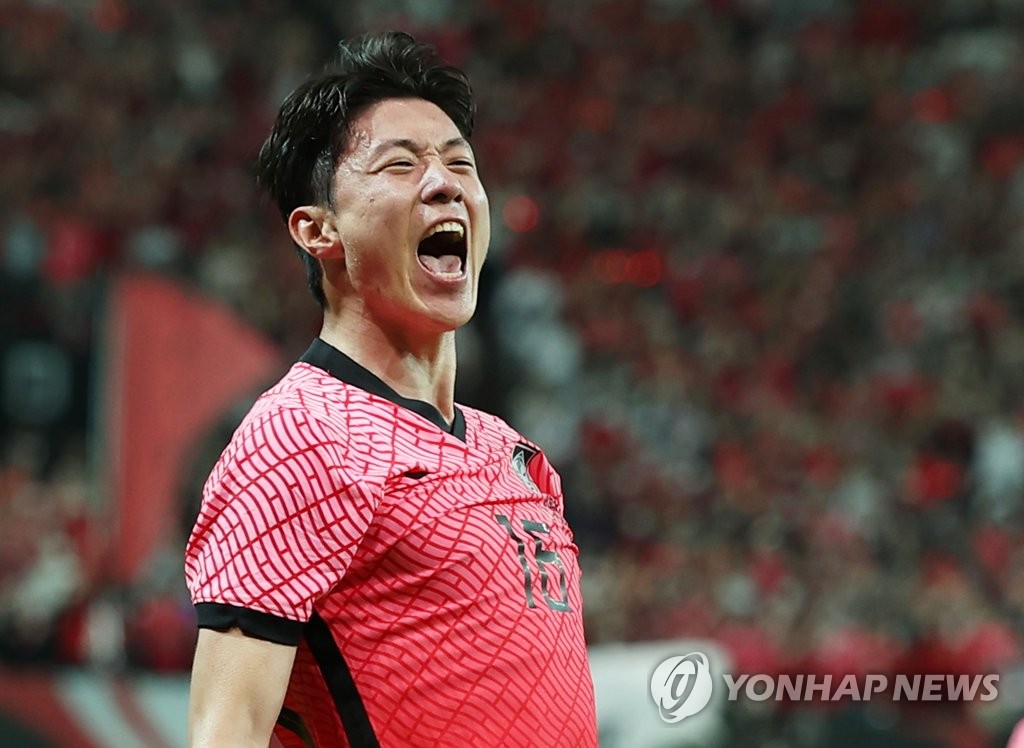 This was the first of four friendly matches that South Korea have scheduled for June, as part of their buildup for the FIFA World Cup beginning in November in Qatar.

South Korea will next face Chile on Monday at Daejeon World Cup Stadium in Daejeon, some 160 kilometers south of Seoul, followed by Paraguay on June 10 and Egypt on June 14.

Brazil pushed South Korea on their heels from the opening moments and had Thiago Silva's header wiped out on an offside goal just 90 seconds in.

The early pressure paid off in the form of Richarlison's opening goal. Alex Sandro broke down the defense with quick penetration into the box and passed the ball off to Fred. The Manchester United midfielder misfired on the shot, and the ball instead rolled toward Richarlson, whose shot went in off goalkeeper Kim Seung-gyu for a 1-0 Brazil lead. 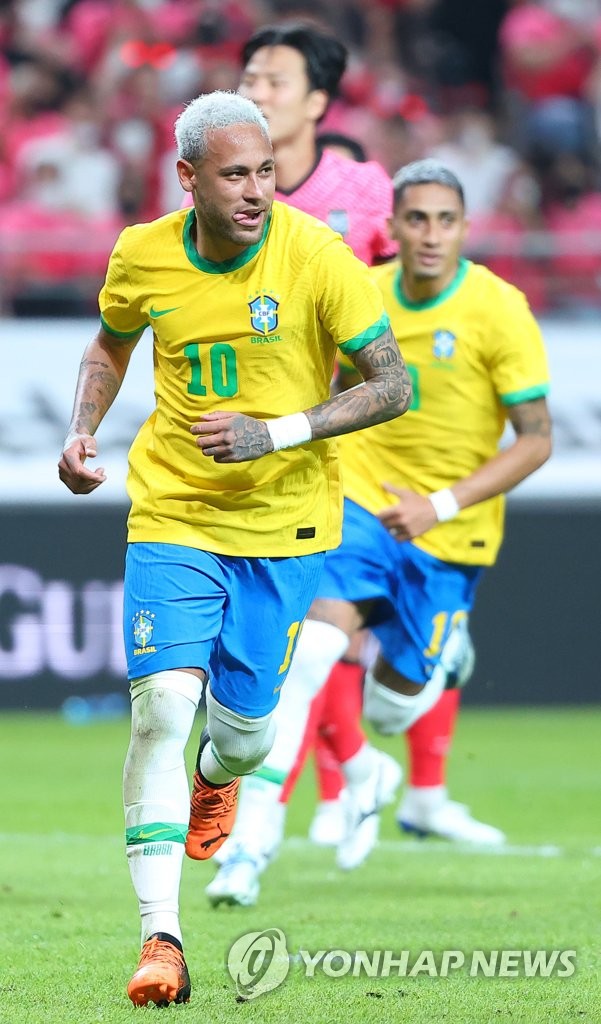 South Koreans looked flustered against Brazil's high pressing, and the South American created one turnover after another deep in the South Korean zone.

The hosts finally put some pressure on Brazil in the 12th minute, with Son Heung-min and Hwang In-beom testing goalkeeper Weverton.

The equalizer came at the half-hour mark, when Hwang Ui-jo, with Silva draped on his back in the right side of the box, turned and fired the shot in off the far post.

Kim Seung-gyu made outstanding saves on Richarlison, and then Dani Alves in the 38th minute, single-handedly keeping the match tied.

But Brazil reclaimed their lead some dozen minutes later. Defender Lee Yong was called for a foul on Sandro in the box following a brief video review, and Neymar stepped up for the spot kick. He fooled Kim Seung-gyu in net and easily poked the ball into the bottom right corner for his 72nd international goal. 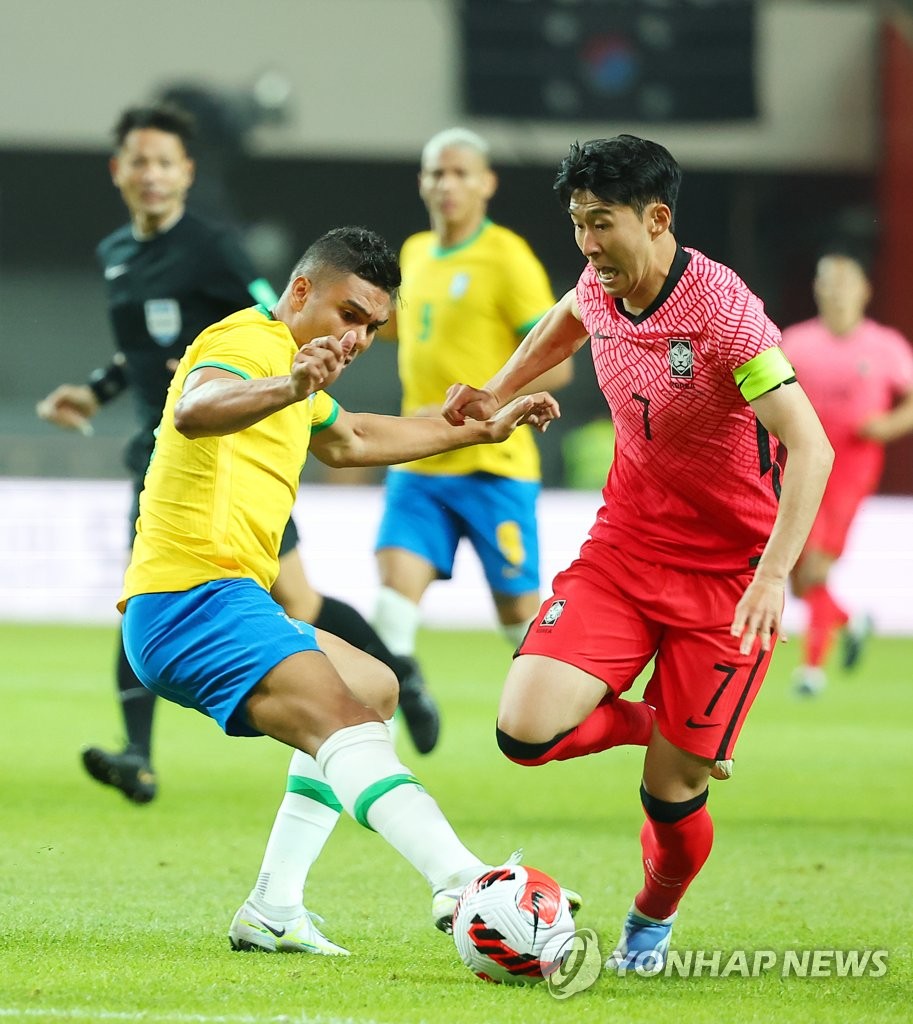 Neymar had been questionable for the match after hurting his right foot Wednesday. He had some swelling on the top of the foot but looked none the worse for wear against South Korea.

Silva headed one off the bar in the dying seconds of the first half, with Casemiro sending the rebound over the open net.

South Korea conceded another penalty some 12 minutes into the second half, once again after a video review. This time, it was Kim Young-gwon's hard foul on Sandro in the area, and Neymar once again fooled Kim Seung-gyu before rolling the ball into the open corner on the right.

Philippe Countinho scored in the 80th minute, soon after replacing Neymar, and Jesus had Brazil's final goal during injury time.

Brazil had 14 shot attempts to South Korea's five and held a 7-4 edge in shots on target.

Hwang Ui-jo, the South Korean goal scorer, said he'd figured his goal scoring drought would end at some point, and having already faced Thiago Silva in the Ligue 1 in France last season while playing for FC Girondins de Bordeaux came in handy Thursday.

"I hope I can start scoring more goals from here and on," Hwang said. "This was a good learning experience for us, and it will help us figure out how to battle strong teams. We'll try to get better over the next three matches."

Brazil and South Korea are both headed for the World Cup and could potentially meet in the knockout stage. Brazil are in Group G with Serbia, Switzerland and Cameroon. South Korea will play Portugal, Ghana and Uruguay in Group H. 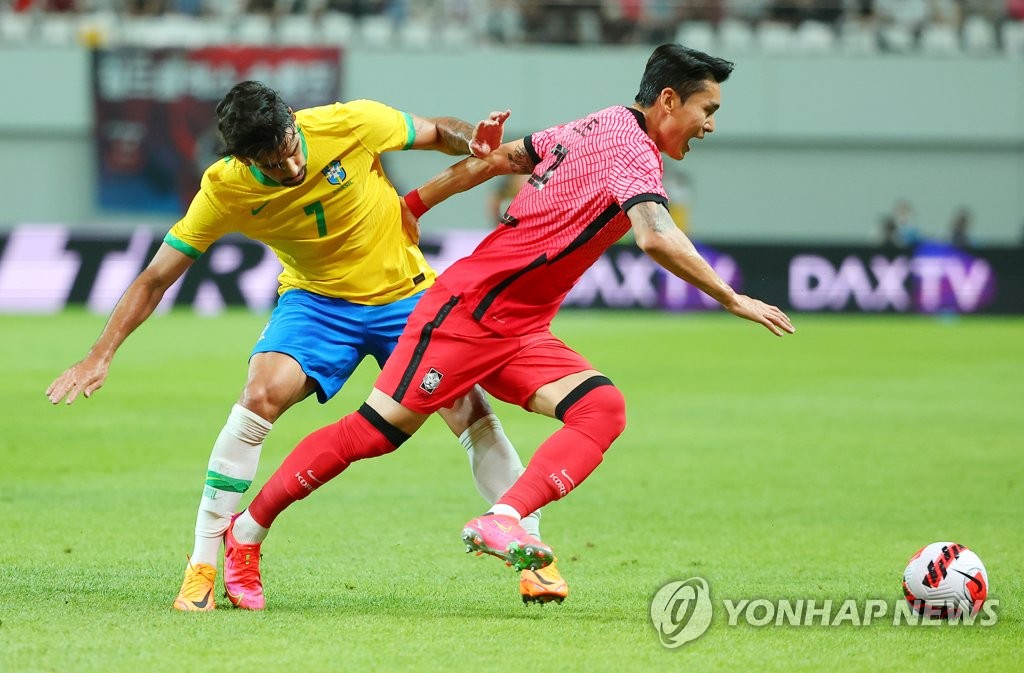