YANGSAN, South Korea, June 3 (Yonhap) -- Police on Friday imposed their first ban on rallies in front of former President Moon Jae-in's residence in Yangsan, southeastern South Korea, as the Moon family has reportedly been suffering from loud noises and abusive language produced by demonstrators and conservative activists since his retirement early last month.

The Yangsan Police Station said it has issued a ban against two rallies planned by an organization of victims of abnormal reactions from COVID-19 vaccines and their families in front of Moon's home and the nearby community hall of Pyeongsan Village.

Police had previously restricted rallies by anti-Moon protesters in the rural village, but it is the first time that rallies have been entirely prohibited in front of the former president's retirement home and in its vicinity. 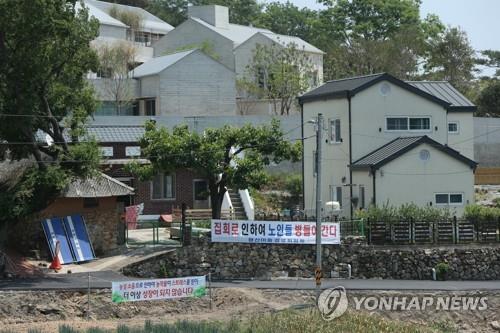 The ban came after Moon and his wife, Kim Jung-sook, on Tuesday lodged a complaint against four demonstrators from three conservative civic groups, saying the accused hurled insults at the couple and violated laws during rallies in front of their home. The demonstrators are accused of insulting and defaming Moon through repetitive and expletive-laden shouts of false information and violating laws on public security.

Moon and his family arrived at their new home in Pyeongsan village of Yangsan, 420 kilometers southeast of Seoul and just north of Busan, on May 11 after his retirement. Pyeongsan is known as a quiet rural village with just 54 households.

According to Yangsan police, the group of vaccine victims' families had notified police of its plan to stage rallies in 13 locations in and around the village from Saturday to July 1. The rally locations reportedly include a noodle restaurant and Catholic churches, which were once visited and are likely to be visited by the Moons.

The group is one of several organizations that have held loud rallies in Pyeongsan village, police said, adding they have played loud music or used abusive language from their car speakers, disturbing residents.

"A total of 55 residents of Pyeongsan village have so far submitted complaints to the police over noise from demonstrators, and 10 of them have even submitted a medical certificate stating that they have received psychiatric treatment," a police official said.