SEOUL, June 3 (Yonhap) -- K-pop boy group Seventeen's fourth full-length album has sold more than 2 million copies in the first week of its release, a record for all albums released this year, the group's agency said Friday.

It was the most first-week sales of all albums released this year to date, Pledis added.

The album had widely been expected to become a big hit, as it sold 1.75 million copies on the day of its release, well over the group's personal first-week sales record set with its ninth EP, "Attacca."

"Face the Sun" become the band's sixth album to have sold more than 1 million copies with its third full-length album, "An Ode," being the first one upon its release in September 2019. 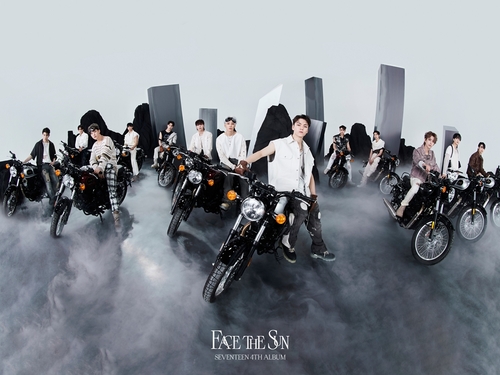 "Face the Sun," which portrays the band's hope to become an existing presence as essential as the sun in the world, consists of nine group songs without solo or unit numbers.

The 13-piece group is set to hold its third world tour starting June 25-26 in Seoul.