(ATTN: UPDATES with more details in paras 2, 6)
By Song Sang-ho

SEOUL, June 6 (Yonhap) -- South Korea and the United States fired eight ballistic missiles into the East Sea on Monday in response to North Korea's missile launches the previous day, according to the South's military.

The Joint Chiefs of Staff (JCS) said the allies launched the ground-to-ground Army Tactical Missile System (ATACMS) missiles from an eastern coastal region in Gangwon Province starting at 4:45 a.m. for around 10 minutes. 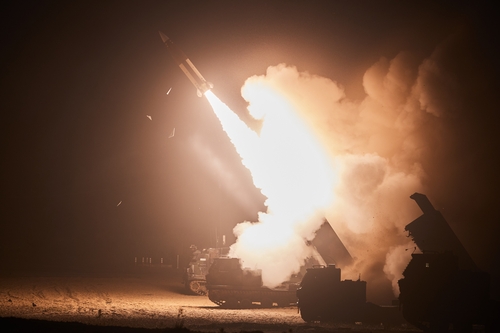 "The South Korea-U.S. combined firing of the ground-to-ground missiles demonstrated the capability and posture to launch immediate precision strikes on the origins of provocations and their command and support forces," the JCS said in a press release.

"Our military strongly condemns the North's series of ballistic missile provocations and seriously urges it to immediately stop acts that raise military tensions on the peninsula and add to security concerns," it added.

The North's weekend salvo is presumed to have involved a variety of SRBMs, including the KN-23 missile modeled after Russia's Iskander ballistic missile. The KN-23 is known for its "pull-up maneuver," designed to avoid interception.

Seoul officials have warned that Pyongyang's military provocations will be met with "corresponding" reactions.

Shortly after the North's launch of three ballistic missiles, including an apparent intercontinental ballistic missile (ICBM), on May 25, the South and the U.S. conducted combined missile launches in their first such joint move since 2017.