SEOUL, June 6 (Yonhap) -- Ruling People Power Party Chairman Lee Jun-seok and a group of PPP lawmakers visited the Ukraine capital of Kyiv and discussed ways of cooperation in rebuilding the city in the wake of the Russian invasion, the Kyiv governor said Monday.

Lee left for Ukraine on Friday as head of a PPP delegation consisting of about 10 members in a trip aimed at expressing support and solidarity for the Ukraine people amid the war with Russia. The delegation paid a visit to Ukraine's western city of Lviv on Saturday.

"Today, the parliamentary delegation of the Republic of Korea headed by Lee Jun-seok, the leader of the ruling People Power Party, paid an official visit to the Kyiv region," Kyiv Gov. Oleksiy Kuleba said in a a Facebook post, uploading photos of the visit made Sunday.

The governor said the delegation visited the graves of tortured civilians in Bucha and looked around the destroyed residential neighborhoods in Irpin.

The two sides also discussed matters related with cooperation and joint projects on restoring Kyiv in the wake of the Russian invasion, Kuleba said, expressing "appreciation" for the support.

Ahead of the departure for Ukraine, Lee met with Ukrainian Ambassador to South Korea Dmytro Ponomarenko in Seoul and delivered the delegation's intent to learn the situation on the ground and report its findings to President Yoon Suk-yeol.

The delegation is expected to meet with Ukrainian President Volodymyr Zelenskyy during its stay.

Lee's trip, however, has drawn criticism from within his own party.

Rep. Chung Jin-suk, a five-term lawmaker, criticized Lee for forging ahead with the trip for his own political gains despite opposition from government officials handling foreign affairs and national security.

"Most key officials on foreign affairs and national security are said to have balked at this," Chung said of Lee's trip in a Facebook post. "A ruling party politician must be prudent in decisions regarding diplomatic issues that the government considers uncomfortable." 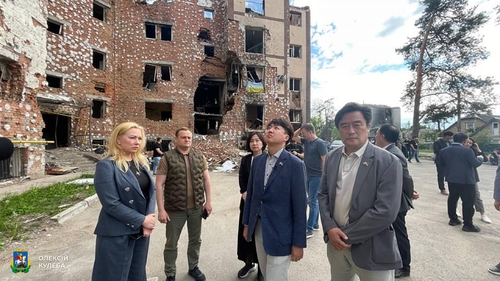 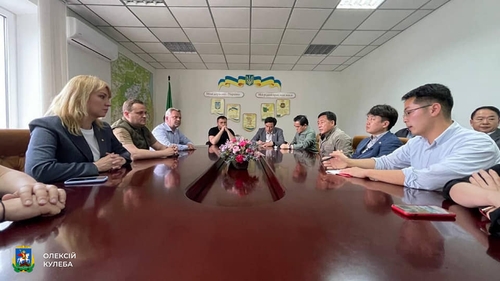