SEOUL, June 6 (Yonhap) -- Unionized cargo truckers will go on a general strike as warned this week to demand freight fare hikes and other assistance measures to cope with soaring fuel prices, their leaders said Monday.

Most of the 25,000 members of the Cargo Truckers Solidarity, affiliated with the Korean Confederation of Trade Unions, and a large number of non-unionized truckers are expected to join the strike set to kick off at the beginning of Tuesday.

"As this is about our right to survive, we can't back off," a union official said.

The truckers' union threatened last month to go on a general strike on June 7, protesting that surging diesel prices are threatening their right to survival. They demanded a hike in freight rates and other support measures.

The union has also demanded an extension of the Safe Trucking Freight Rates System designed to prevent dangerous driving and guarantee minimum freight rates for truck drivers. The system, introduced for a three-year run in 2020, is scheduled to end on Dec. 31.

Police have said they will deal sternly with any illegal acts during the strike, vowing to arrest any union members trying to disrupt the services of non-striking truckers. 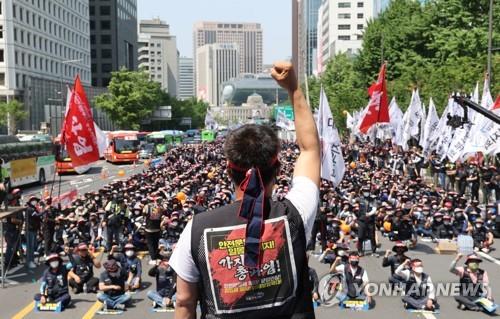