WASHINGTON, June 6 (Yonhap) -- The United States does not and will not link its humanitarian assistance for North Korea to progress in denuclearization talks with the impoverished country, a senior U.S. diplomat said Monday, urging Pyongyang to engage in dialogue and also accept U.S. or international assistance for dealing with COVID-19.

"We are also gravely concerned by the serious outbreak of COVID-19 underway in the DPRK right now, and how it may affect the health and well being of the North Korean people," Kritenbrink said in a forum jointly hosted by the Center for Strategic and International Studies and Korea Foundation.

"We continue to support efforts to provide humanitarian assistance and COVID-19 vaccines to the DPRK. We see this humanitarian crisis as separate from making progress on denuclearization and we do not and will not link the two," he added. 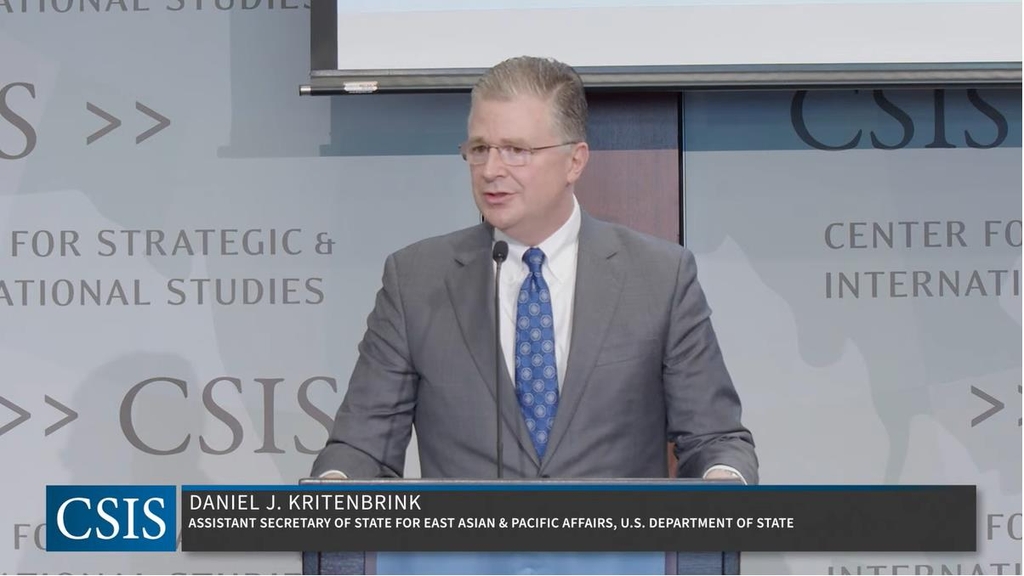 North Korea has said more than 4 million people with fever have been identified since it began reporting potential COVID-19 cases last month.

The U.S. earlier said it has no immediate plans to share COVID-19 vaccines with North Korea from its own supplies, but that it would support the provision of such assistance by health organizations, including those based in the United States.

North Korea is reportedly refusing to accept vaccines from any international organizations, including COVAX.

Despite its apparently ongoing epidemic, Pyongyang has staged 18 rounds of missile tests this year, the most recent being a barrage of eight short-range ballistic missiles on Sunday.

Kritenbrink said the U.S. and its two closest Asian allies -- South Korea and Japan -- remain ready to counter any threat posed by North Korea, but that the door to diplomacy also remains open.

"We do, however, continue to believe that we can find a peaceful and diplomatic resolution with the DPRK. We have a practical calibrated approach. The United States harbors no hostile intent towards the DPRK and the path to dialogue remains open," he said.

"We urge the DPRK to take that path to commit to serious and sustained diplomacy and to refrain from pursuing further destabilizing activities," he added.

Kritenbrink also reaffirmed U.S. commitment to the defense of South Korea and Japan, saying, "I want to be absolutely clear. We should make no mistake. Our commitment to upholding our security commitments remains, as I said at the top, absolutely ironclad."

Turning to the U.S.-South Korea alliance, the U.S. diplomat said the decades-old relationship has already evolved into a "global comprehensive strategic alliance," about two weeks after U.S. President Joe Biden and South Korean President Yoon Suk-yeol agreed to develop the bilateral relationship into such an alliance during Biden's trip to Seoul.

"The US-ROK alliance has matured and evolved into a global comprehensive strategic alliance as President Biden and President Yoon announced in the joint statement of May 21," he declared. ROK stands for the Republic of Korea, South Korea's official name.

"I am confident that the United States and the Republic of Korea together can and will meet any challenges and seize the opportunities presented before us across the Indo-Pacific and around the world," added Kritenbrink.

U.S. will not link COVID-19 assistance to denuclearization talks with N. Korea: Kritenbrink

U.S. will not link COVID-19 assistance to denuclearization talks with N. Korea: Kritenbrink