Most of the 25,000 members of the Cargo Truckers Solidarity, under the wing of the Korean Confederation of Trade Unions, as well as many non-unionized truckers, were predicted to join the walkout launched at midnight.

"In light of the impact this general strike could have on the national economy, we had tried to negotiate with the government, but the land ministry in charge came up short on dialogue," a union official said.

The transport ministry said about 9,000 carriers, around 40 percent of the some 22,000-member union, are estimated to have taken part in a ceremony to mark the launch of the strike held earlier in the day.

The ministry said logistics losses are not that large, as the government has taken precautionary measures. A total of 12 harbors across the country are operating normally.

The truck drivers' union threatened last month to go on an indefinite general strike, protesting that skyrocketing diesel prices are throttling their right to survival.

The union is demanding an extension of the Safe Trucking Freight Rates System designed to prevent dangerous driving and guarantee minimum freight rates for truck drivers. The system, introduced for a three-year run in 2020, is scheduled to end on Dec. 31.

Truckers said high fuel costs are feared to threaten their survival if the freight rate system expires as scheduled. They also demand a hike in freight fares and other support measures, including the furtherance of their labor rights.

Police have said they will respond sternly to any illegal acts during the strike and arrest any union members trying to disrupt the services of other non-striking truckers.

Holding a virtual meeting a day earlier, police, land, trade, labor and interior ministry officials discussed how to help procure alternative freight transportation services in the wake of the strike.

President Yoon Suk-yeol said the walkout should be handled according to principles.

"Whether it's the unjust labor actions of employers or illegal actions of laborers, I've made clear since the campaign that I will handle them in accordance with the law and principles," he told reporters when asked how he would deal with the strike.

The walkout has caused shipment suspensions at some cement factories and distribution centers, as well as at a factory of Hyundai Steel in the southern port city of Pohang, though it has not led to major logistics disruptions, according to the transport ministry.

"The strike will inevitably reduce the shipment of cement. If the situation continues, it could affect the industry, which has already experienced various unfavorable conditions, such as high energy costs," a cement company official said.

The ministry said it is ready to sit down with the labor union for talks on their demand.

The government has implemented an emergency transport scheme to minimize any impacts of the collective action, which calls for sending vehicles for official use to major ports and enhancing the monitoring of the logistics situation, the ministry added. 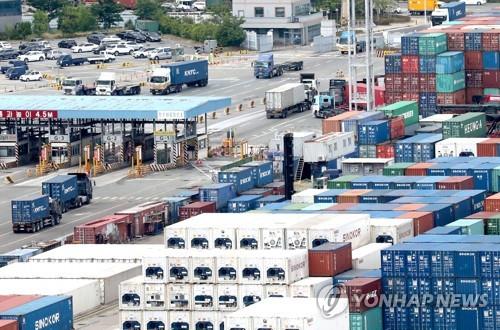