SEOUL, June 7 (Yonhap) -- A North Korean defector group said Tuesday it sent balloons carrying masks and COVID-19 medicines across the border earlier this week to help people there, while the Seoul government asked activists to refrain from such a campaign that may have a negative impact on regional stability.

Twenty big balloons filled with 20,000 pieces of masks, 15,000 Tylenol pills and 30,000 vitamin C pills were floated between 10 and 11 p.m. Sunday from Pocheon, north of Seoul, Fighters for a Free North Korea said in a press release. It remains unconfirmed whether the materials have landed on the North's soil as intended.

The South's unification ministry handling inter-Korean affairs reiterated a call for refraining from such a move, calling it a violation of the Development of Inter-Korean Relations Act.

Under the ban, violators are subject to up to three years in prison or a maximum fine of 30 million won (US$23,700). The North has angrily responded to acts by activists here of sending balloons mainly carrying anti-Pyongyang propaganda leaflets and portable radios.

"We fully understand the group's efforts to help North Koreans, but as the government is seeking inter-Korean health care cooperation, we have publicly urged them on numerous occasions to refrain (from launching), considering what will be of real help to the North Koreans," a ministry official told reporters on the customary condition of anonymity.

The Seoul Metropolitan Police Agency said it began an inquiry into the activists on charges of violation of the inter-Korean relations act.

The group had already been booked after they sent balloons to the North on April 25 and 26 carrying photos of then President-elect Yoon Suk-yeol. 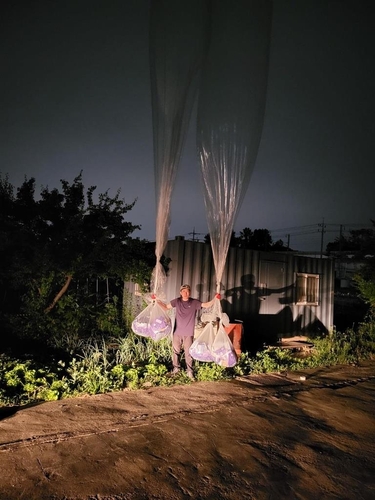