SEOUL, June 7 (Yonhap) -- Part of the remains of St. Andrew Kim Tae-gon, the first native Korean Catholic priest, have been insidiously shared by local Catholic churches and individuals for decades, a report showed Tuesday, reigniting a controversy over the preservation and transactions of relics of Catholic saints.

The report was published in 1996 in commemoration of the 150th death anniversary of the saint, who was persecuted and executed for practicing Christianity in 1846, a year after he was ordained as the first Korean priest. He was canonized as a saint by Pope John Paul II during his visit to South Korea in 1984.

It was based on documents related to the relocation project of Kim's body and follow-up research, and interviews led by an anonymous priest. 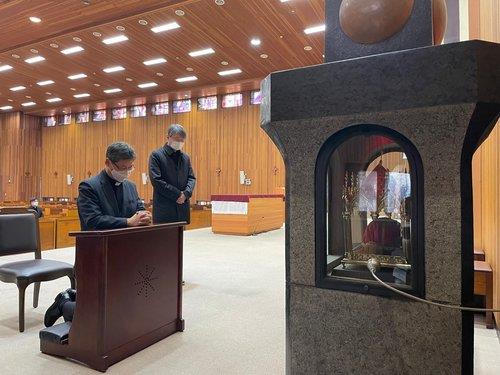 One of the papers from the 1996 report showed that some 141 institutions and clergy, including a church of the Archdiocese of Seoul, had been given a fragment of Kim's body as of 1996.

A separate document handwritten by a local nunnery between 1969 and 1996 said his remains have been scattered to a total of 209 places, including 40 churches or religious institutions. More than 160 Catholic priests and followers have obtained a physical relic of the saint. 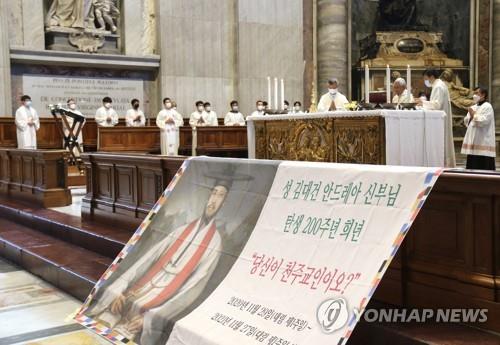 The whereabouts of St. Andrew Kim Tae-gon's physical remains have come into the spotlight since a fragment of Kim's spine was put on sale through an online e-commerce platform in March.

The Korean Catholic Church pointed out that the Code of Canon Law strictly bans the sale of sacred relics without the permission of the Vatican.

According to the 2017 decree by a congregation of the Holy See, moreover, the significant relics, referring to the bodies or their significant parts of a saint, should be preserved in a suitable container and displayed at a holy place for service.

As the controversy heated up, the Catholic Archdiocese of Seoul have carried out an investigation into its 150 member churches for the recent two months to check whether they actually have the physical relics.

The Archdiocese said it was hard to verify the exact locations and possessors due to the lack of available documents, admitting it should have tracked the records of the sacred remains more properly.

"We will reveal the outcome and follow-up measures of the investigation in a more transparent way," said Matthias Hur Young-yup, a spokesperson of the Archdiocese of Seoul.