SEOUL, June 7 (Yonhap) -- Samsung Electronics Vice Chairman Lee Jae-yong left for Europe on Tuesday on a business trip that is likely to involve a visit to a semiconductor equipment maker in the Netherlands.

Lee arrived at Gimpo International Airport at around 11:45 a.m. and left the country for the Netherlands, Germany and France.

Lee is widely expected to visit Veldhoven-based ASML, one of Samsung's biggest chipmaking partners and the sole maker of extreme ultraviolet (EUV) lithography systems, which is essential to make advanced chips.

He did not answer questions from reporters asking about Samsung's possible merger and acquisition deal.

Samsung has been actively looking for a potential M&A target in a wide array of businesses, including chips. Senior executives have hinted multiple times that a deal could come sooner than later.

His trip, which runs until June 18, is his second business trip overseas in six months. In December, he visited the United Arab Emirates and Saudi Arabia to expand global networks and seek new business opportunities.

Choi Yoon-ho, president and CEO of Samsung SDI, a battery and electronic materials manufacturer, was on the same flight, but he is said to not be accompanying Lee during the entire itinerary.

Lee's overseas trip came two weeks after the South Korean tech giant announced a massive investment plan for the next five years to sharpen its competitiveness in the chip industry.

Samsung said it will invest 450 trillion won (US$355 billion) in semiconductor and biopharmaceuticals in the span of five years, 80 percent of which will be used for research and development and nurturing talent in South Korea, especially in advanced chipmaking.

In particular, the company said it will import the EUV machines at an earliest date, which it said "will give Samsung an advantage to make most advanced microchips." 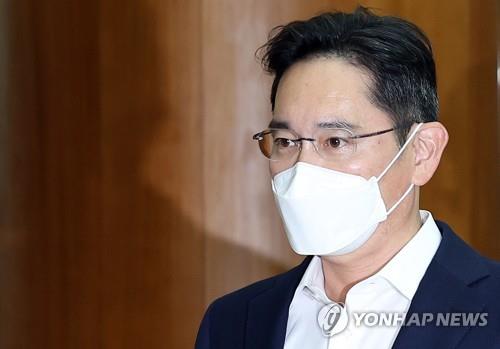