SEOUL, June 7 (Yonhap) -- A independent counsel investigation team went into operation Tuesday to look into the suicide death of an Air Force servicewoman following alleged sexual abuse by a superior.

Lee Ye-ram, a then 23-year-old female master sergeant affiliated with the Air Force's 20th Fighter Wing, killed herself in late May 2021 after claiming she was sexually abused by a male superior of the same rank two months earlier.

Lee's family claimed she was also coerced and pressured by other male colleagues not to report the case to authorities. The family also accused the military police chief of her unit and other investigators for a shoddy investigation after the case was reported.

As the case drew intense public fury, the National Assembly in April unanimously passed a bill mandating an independent special counsel probe into the case, including whether any defense ministry and Air Force officials attempted to cover it up.

On Tuesday, the indendent investigation team led by special prosecutor Ahn Mi-young began its work at an office in western Seoul, vowing to get to the bottom of the case.

"A total of 15 people have been indicted for trial at the military court, but a variety of allegations raised by different social entities still linger, including faulty probes, the infliction of secondary damage and attempts to cover up the case," Ahn said during the ceremony.

"The special counsel team will do its best to reveal the truth behind the case," she said.

The team has until Aug. 13 to wrap up its investigation under the relevant bill that mandates the probe be carried out within 70 days of its launch. The investigation was launched Sunday, two days ahead of the official opening of the office.

The probe is extendable by 30 days upon approval from the president.

The special counsel investigation team will be composed of about 80 investigators and support personnel, including three senior lawyers appointed as special assistant counsels. 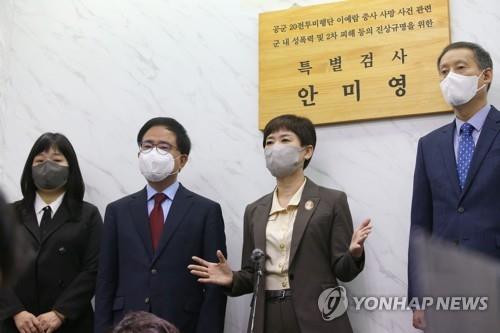