SEOUL, June 7 (Yonhap) -- U.S. Deputy Secretary of State Wendy Sherman met members of the LGBTQ community in Seoul on Tuesday and voiced support for their efforts to promote rights of sexual minorities, according to the U.S. embassy here.

Sherman held the meeting with representatives of the LGBTQ community at the official residence of the U.S. ambassador and joined a ceremony to hoist the Progress Pride Flag, widely recognized as the community's symbol.

Among them were Lim Tae-hoon, director at the Center for Military Human Rights Korea and a gay rights activist, and transgender entertainer Harisu.

"I was honored to raise the Progress flag today at the U.S. Chief of Mission residence in Seoul as a symbol of the Biden-Harris Administration's commitment to advance the human rights of LGBTQI+ people everywhere," she said in a Twitter message posted by the U.S. Embassy

Earlier in the day, the U.S. official had talks with her South Korean counterpart Cho Hyun-dong, after which she warned that North Korea would face a "swift and forceful" response in case of a nuclear test.

She also paid a courtesy call on Foreign Minister Park Jin, as she was on a three-day visit to Seoul, the first leg of her Asia trip. 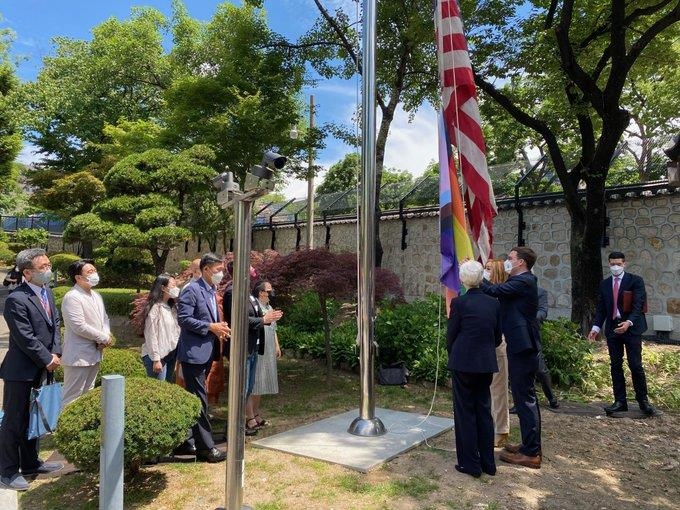 No. 2 U.S. diplomat meets members of LGBTQ community in Seoul

No. 2 U.S. diplomat meets members of LGBTQ community in Seoul