SEOUL, June 8 (Yonhap) -- South Korea on Wednesday lifted the mandatory seven-day self-isolation period for all international arrivals in the latest move to return to pre-pandemic normalcy amid a downtrend in COVID-19 cases.

The country added 13,358 COVID-19 infections, including 59 cases from overseas, bringing the total caseload to 18,188,200, the Korea Disease Control and Prevention Agency (KDCA) said.

The daily caseload had stayed below 10,000 from Sunday through Tuesday on fewer tests over the weekend and the Memorial Day holiday that fell on Monday.

Wednesday's figure is still about 20 percent fewer than that logged a week earlier amid the continued downward trend after reaching the peak of more than 621,000 on March 17.

The country added six COVID-19 deaths, the lowest number in about eight months. The death toll reached 24,305, and the fatality rate stood at 0.13 percent.

The number of critically ill patients came to 114, down from 117 the previous day.

As of 9 p.m., the country had added 11,411 new cases, down 1,413 from the same time a day earlier, according to local governments and health authorities.

As of Wednesday, 44.6 million, or 86.9 percent of the population, had completed the full two-dose vaccinations, and 33.32 million, representing 64.9 percent, had received their first booster shots.

More than 4.19 million people, or 8.2 percent of the population, had gotten their second booster shots, the KDCA said. 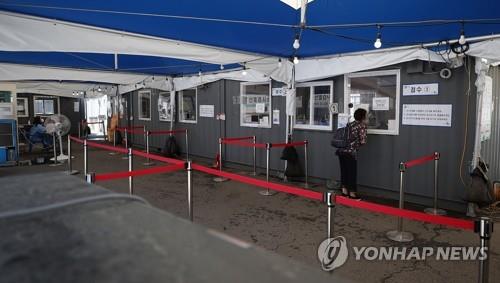 The decline in the virus curve has given a boost to South Korea's efforts to restore normalcy.

On Wednesday, the government lifted the mandatory seven-day self-isolation period for all international arrivals, regardless of their nationalities or vaccination status.

Still, international arrivals are required to take a PCR virus test within three days of their entry into South Korea. They also must submit a negative COVID-19 result -- by taking either a PCR test or supervised rapid antigen test -- before boarding flights to South Korea.

South Korea increased the number of weekly flights on international routes to 732 in June from 532 in May as it began fully normalizing the operation of Incheon International Airport amid growing air travel demand.

"Experts have warned of another virus wave in summer. There are risks that could cause an upturn in infections, such as seasonal festivals, summer vacation and the increased use of air conditioners. We should not let down our guard," Second Health Vice Minister Lee Gi-il said during a meeting of the Central Disaster and Safety Countermeasures Headquarters.

As part of effort to better protect high-risk groups, the government is pushing to approve AstraZeneca's antibody treatment Evusheld for emergency use this month.

Separately, South Korea placed monkeypox at the second level of contagious diseases out of a four-tier scheme on Wednesday in the wake of the fast spread of the virus across the globe, which had traditionally been confined to Africa.