SEOUL, June 8 (Yonhap) -- President Yoon Suk-yeol said Wednesday that a potential pardon for jailed former President Lee Myung-bak "is not an issue to talk about now."

Yoon made the remark to reporters upon arrival at the presidential office following news reports that Lee filed for a suspension of his sentence and could be included in beneficiaries of a presidential pardon that could be carried out to mark Aug. 15 Liberation Day.

"This is not an issue to talk about now," Yoon said when asked to comment on a pardon for Lee.

The remarks are seen as the president's intent to distance himself from the increasing discussions on a pardon for Lee within the ruling People Power Party (PPP).

"As I have said multiple times, I believe it is unfair to keep a former president in prison when another has been set free through a pardon," he said, referring to former President Park Geun-hye pardoned in December. 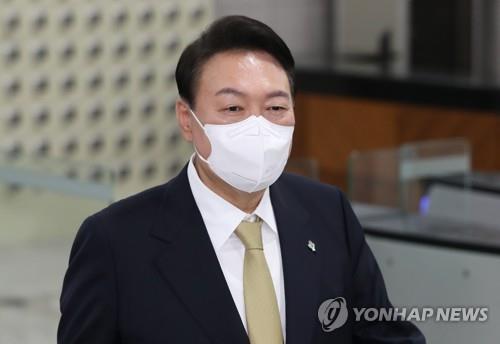 The prosecution is scheduled to begin its deliberation on Lee's application for a suspension of his sentence filed with a district prosecutors office in Anyang, south of Seoul, last week.

The 81-year-old Lee, now serving a 17-year prison sentence for corruption, reportedly filed for a suspension of his sentence, citing health issues, last Friday amid speculation he may be granted a special pardon on the occasion of National Liberation Day, which falls on Aug. 15.