ICHEON, South Korea, June 8 (Yonhap) -- More than a dozen unionized truckers on a general strike were apprehended Wednesday for allegedly obstructing business operations of a plant in Icheon, officers said.

A total of 15 members of the Cargo Truckers Solidarity, under the wing of the Korean Confederation of Trade Unions, were taken into custody on charges of blocking cargo trucks from entering the plant operated by the country's leading beverage company, Hite Jinro Co., in the city 80 kilometers southeast of Seoul at around 8:30 a.m.

The union is demanding an extension of the Safe Trucking Freight Rates System designed to prevent dangerous driving and guarantee minimum freight rates for truck drivers. The system, introduced for a three-year run in 2020, is scheduled to end on Dec. 31. 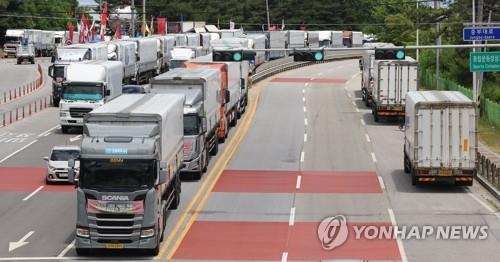