SEOUL, June 8 (Yonhap) -- Striking cargo truckers decried Wednesday that soaring fuel prices are throwing them to the edge of survival, demanding the extension of a freight rate system guaranteeing their basic wages, as their general walkout entered the second day.

Thousands of members of the Cargo Truckers Solidarity, under the wing of the Korean Confederation of Trade Unions, allied with many non-unionized truckers, went on a general strike a day earlier, protesting that skyrocketing diesel prices are throttling their right to survival.

Truck drivers are demanding an extension of the Safe Trucking Freight Rates System designed to prevent dangerous driving and guarantee minimum freight rates. The system, introduced for a three-year run in 2020, is scheduled to end on Dec. 31.

They say high fuel costs are feared to threaten their survival if the freight rate system expires as scheduled. They also demand a hike in freight fares and other support measures, including the furtherance of their labor rights. 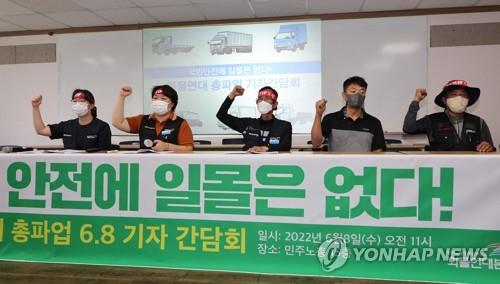 "Freight laborers have been cornered into a serious crisis in their livelihood," Lee Bong-joo, leader of the truckers' union, said in a press conference in central Seoul. "Oil price hikes jacked up the costs of freight transportation, but freight fares remain unchanged."

Increased diesel prices drove up monthly fuel costs up to 3 million won (US$2,390) per cargo driver, offsetting nearly all of the average monthly net income of 3.42 million won per person, according to Lee.

"More freight laborers will be forced to quit as the longer they drive the more they will lose," he said.

According to the trade union, the average price for a liter of diesel stood at 2,028 won as of Tuesday, up 47.6 percent from the 1,374 won in June last year.

The transport ministry estimated about 6,500 carriers, or 29 percent of the some 22,000-member union, joined the strike on its second day. Participants decreased from 9,000, or 40 percent, on the first day.

The ministry maintains logistics losses are not that large, as the government has taken precautionary measures. A total of 12 harbors across the country are operating normally, it said.

Several scuffles between strikers and police were reported nationwide on the second day of the walkout.

In Icheon, nearly 52 kilometers southeast of Seoul, 15 union members were taken into custody on charges of blocking cargo trucks from entering a plant operated by the country's leading beverage company, Hite Jinro Co., in the morning.

Two others were arrested in the southern port city of Busan for obstructing the services of two trailers while another striker was apprehended after he blocked a non-striking worker from operating his truck.

Key logistics ports saw the volume of shipping containers entering and leaving drop sharply, with the number at Busan port falling to some 19,000 twenty-foot equivalent units (TEU) Tuesday from some 25,000 TEU the previous day.

In Pyeongtaek, the average daily volume dropped to 68 TEU on Tuesday, around 2.2 percent of the volume before the strike, while in Uiwang, only 631 TEU moved in and out, a level equivalent to about 14 percent of the normal volume.

Container terminals in Incheon were filling up quickly as a result, with some exceeding 90 percent of capacity. 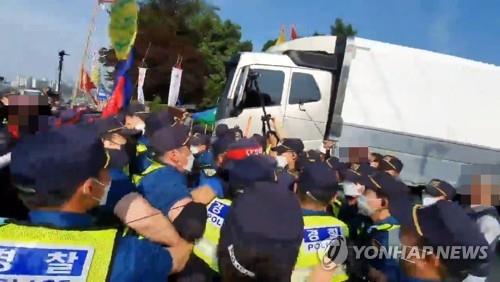 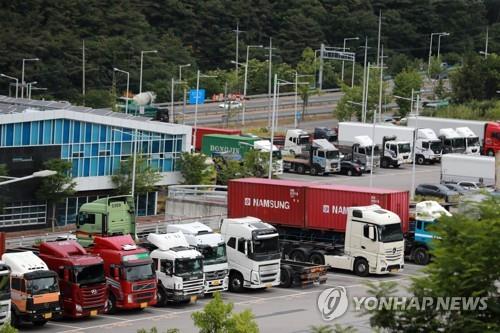