South Korean representatives announced the plan during a board meeting of the International Atomic Energy Agency (IAEA), in Vienna, Austria, which opened Monday.

The aid, to be provided through the U.N. organization, will be used for safety measures related to nuclear reactors, including the dispatch of related IAEA personnel and Ukraine's procurement of necessary equipment and materials, the ministry said. 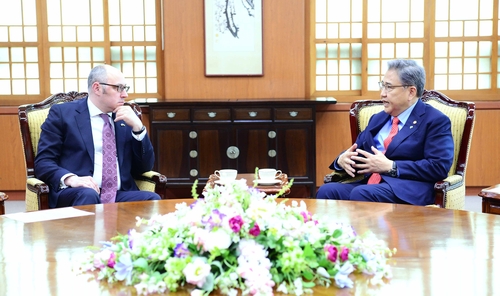 South Korea has sent about $40 million in humanitarian aid to Ukraine since Russia invaded the country in February. Most recently, Seoul provided $3 million to the World Food Programme's emergency relief project last week.

A ministry official said Senik requested Seoul provide weapons necessary to fight against Russia and participate in rebuilding the country.

"We responded by affirming we have been supporting the Ukrainian people with a focus on humanitarian aid and will continue assistance in this manner," the official said.

S. Korea to provide US$1.2 mln in nuclear industry aid to Ukraine

S. Korea to provide US$1.2 mln in nuclear industry aid to Ukraine