SEOUL, June 9 (Yonhap) -- South Korea's Trade Minister Ahn Duk-geun departed for Paris on Thursday to attend a ministerial council meeting of the Organization for Economic Cooperation and Development (OECD) to discuss the ongoing crisis in Ukraine, trade, sustainable growth and other global challenges, his office said.

Under the theme of "The Future We Want: Better Policies for the Next Generation and a Sustainable Transition," the OECD's Ministerial Council Meeting was to take place at its headquarters from June 9-10.

Ahn plans to express his country's firm willingness to actively take part in the organization's efforts to resolve a range of global issues, including the implications of the war in Ukraine, climate change and digital economy, according to the Ministry of Trade, Industry and Energy.

On its sidelines, a meeting of the World Trade Organization's Ottawa Group will take place, where Ahn plans to join his counterparts from 13 nations to discuss global supply chain disruptions, food crisis, and fisheries subsidies, his office said.

The group has 14 "like-minded" WTO members, including Australia, Britain, Canada, the European Union, Japan and Singapore, and discusses specific challenges that hamper the multilateral trading system.

On Saturday, Ahn will attend a non-official ministerial meeting of the newly launched Indo-Pacific Economic Framework (IPEF) to discuss its detailed norms on trade. The meeting will be presided over by U.S. Trade Representative Katherine Tai, according to the ministry.

Last month, U.S. President Joe Biden officially launched the initiative, and South Korea, the U.S. and 12 other nations have so far joined the platform.

The IPEF has four key areas -- fair trade, supply chain resilience, infrastructure and green technology, and tax and anti-corruption, according to the ministry. 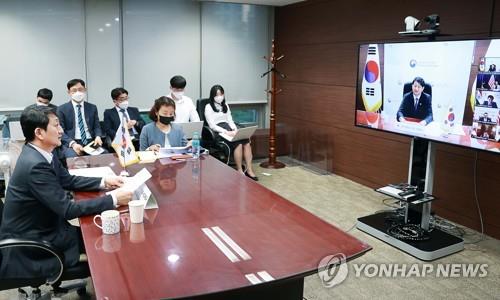