SEOUL, June 9 (Yonhap) -- Expectations of rising inflation have been adding to upward pressure on prices, and their impact on the trajectory of the overall inflation will likely intensify going forward, the central bank said Thursday.

In a report on economic and financial conditions submitted to the National Assembly, the Bank of Korea (BOK) also voiced concerns that the local currency's descent against the U.S. dollar is having a growing impact on inflation, underlining the need for stepped-up monitoring of the foreign exchange market's volatility.

"A recent rise in expectations of inflation has already played a role in raising inflation pressure, and there is a possibility that the pressure could intensify further down the road," the BOK said.

The BOK said the ripple effect from the growing expectations has materialized mostly through hikes in wages and product prices amid rising energy and commodity bills.

"In particular, inflation pressure will likely intensify down the road through wages," it added. "We have determined that the need has arisen to implement policy responses that stabilize these inflation expectations in a way that makes sure the effect of inflation shocks does not last for long." 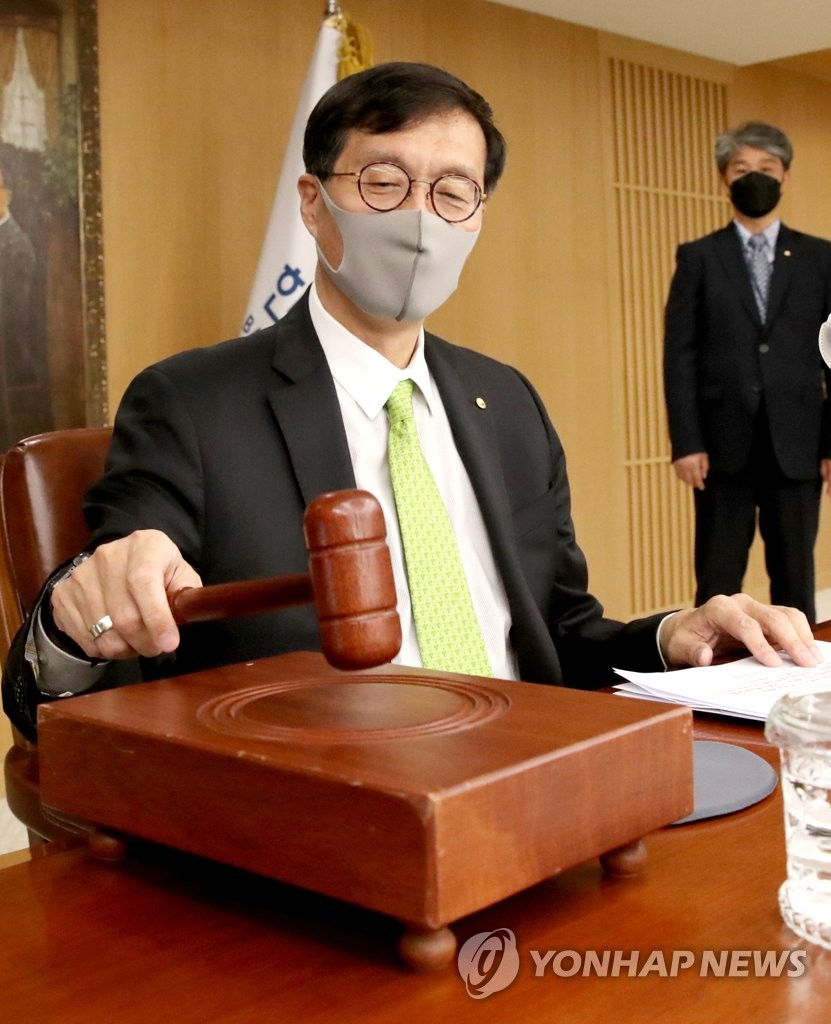 Prices have been under upward pressure as oil and commodity bills have soared amid disruptions of global supply chains that have been exasperated by the ongoing war in Ukraine.

Last month, the BOK hiked its policy rate by a quarter percentage point to 1.75 percent to keep a lid on inflation. It represented the fifth increase in borrowing costs since August last year.

The BOK also revised upward its inflation outlook for this year to 4.5 percent from 3.1 percent projected three months earlier. The forecast, if proved, could be the fastest price growth since 2008.

Meanwhile, the central bank cited the depreciating local currency against the U.S. dollar as a contributing factor for growing inflation pressure, saying the weak currency has led businesses to transfer much of their increased cost burdens in prices of goods they sell to consumers.

The BOK said the "price transfer ratio" of the won-dollar exchange rate had been declining since the financial crisis and neared zero in 2020 but recently turned upward and stood at around 0.06 as of the first quarter of this year.

The ratio refers to the extent of price rises when the won-dollar exchange rate moves by 1 percent.

Based on the analysis, the BOK said the won-dollar exchange rate has contributed to 0.34 percentage point of a 3.8 percent rise in the country's consumer prices tallied in the January-March period of this year.

With regard to the BOK's monetary policy directions in the months to come, Deputy Gov. Park Jong-seok told reporters that the central bank does not "completely" rule out the possibility of a "big-step" 0.5 percentage-point rate hike to combat inflation, but it currently thinks that a 0.25 percentage point increment will be more appropriate.

"If necessary, I think we will be able to adjust (the pace) through communication without causing much volatility in the market," he said.

Park also said the current market expectations that the BOK could raise the key interest rate to as high as 2.5-2.75 percent by the end of this year are "reasonable."

As for the current state of the economy, the BOK said "favorable" conditions have been set up for more spending as the government lifted almost all antivirus curbs in mid-April but voiced concerns that exports will likely grow at a slower pace affected by the Ukraine crisis and pandemic-induced lockdowns in China.

Despite growing uncertainty at home and abroad, Park dismissed concerns that stagflation is lurking ahead, saying that the country's economy is expected to expand at a faster pace than what is regarded as its potential growth rate. Stagflation means a mix of slowing growth and high inflation.