SEOUL, June 9 (Yonhap) -- Rhyu Si-min, a former health minister and an influential liberal commentator, was sentenced to a fine of 5 million won (US$4,000) by a court Thursday for defamatory comments made years ago about Minister of Justice Han Dong-hoon.

The Seoul Western District Court handed out the monetary penalty after convicting Rhyu of defaming Han by making false remarks about him in public between 2019 and 2020 when the minister was serving as a senior prosecutor. 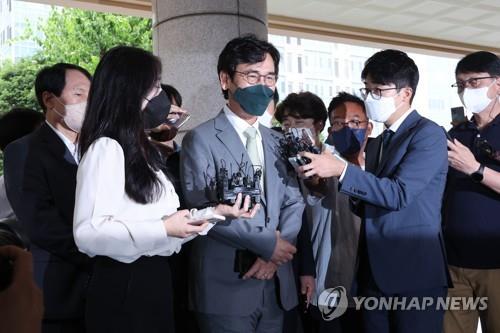 Rhyu, who formerly headed a foundation memorializing late former President Roh Moo-hyun, was indicted in May last year for alleging on his YouTube channel in December 2019 and in a media interview in July 2020 that a prosecution department led by Han at that time illegally accessed his personal bank account and that of the memorial foundation sometime between late November and early December 2019.

"(Han) appears to have suffered considerable psychological pain from the defendant's remarks, as he was recognized as a prosecutor who abused his investigative power for an unjust purpose," the Seoul court said, noting Rhyu may have considerable influence in the formation of public opinion, particularly as a YouTuber with more than 1 million subscribers.

In the previous court hearing, prosecutors demanded a one-year prison term for Rhyu.

Leaving the courtroom, Rhyu told reporters that he respects the sentence but will appeal to seek a verdict of acquittal.

Han met reporters at his office before the sentencing hearing but declined to comment, saying it is not appropriate for him, as a minister, to speak on personal litigation matters.