SINGAPORE, June 10 (Yonhap) -- The defense chiefs of South Korea and China held bilateral talks on the margins of a security forum in Singapore on Friday, with North Korea's continued saber-rattling high on their agenda.

The talks between Defense Minister Lee Jong-sup and his Chinese counterpart, Wei Fenghe, came as Seoul seeks to secure regional cooperation to stop Pyongyang's provocations amid concerns about the possibility of the regime carrying out a nuclear test.

Lee called on China to play a constructive role to encourage the North's denuclearization.

"Minister Lee stressed the need for South Korea and China to work together to make the North understand the benefits that it can get from abandoning nuclear arms outweigh the costs of possessing nuclear arms," Seoul's defense ministry said in a press release.

The Chinese minister expressed Beijing's hope for cooperation with Seoul in addressing Korean Peninsula issues, reaffirming his country's goal for the peninsula's denuclearization, according to the ministry.

The launch of the phone lines -- each linking the two countries' Navies and Air Forces -- came as Seoul has been striving to enhance communication with Beijing in the wake of Chinese warplanes' repeated, unannounced entries into South Korea's air defense identification zone.

The latest addition brought the total number of hotlines between the two countries to five, including one between their defense ministries.

The ministers also discussed the issue related to the installation of a U.S. THAAD missile defense battery in South Korea.

Lee defended it as an "indispensable, defensive" step taken in the face of the North's evolving nuclear threats, according to a Seoul official. China has opposed the THAAD unit, arguing it hurts its security interests.

In addition, Lee explained the Yoon Suk-yeol administration's work to formulate its own Indo-Pacific strategy.

He told Wei the strategy is geared toward promoting the "rules-based" order incorporating such values as freedom of navigation and overflight, according to the official.

During the talks, the two ministers also agreed to seek reciprocal visits to each other's country and bolster exchanges of military personnel, including one at a vice ministerial level.

Earlier in the day, Lee held separate talks with his Canadian counterpart, Anita Anand, to discuss their respective countries' envisioned strategies for the Indo-Pacific region and other issues.

At the talks with his Singaporean counterpart, the two sides signed a revision to their 2009 arrangement on defense cooperation to strengthen joint efforts to deal with non-traditional security challenges, like those in cyberspace. 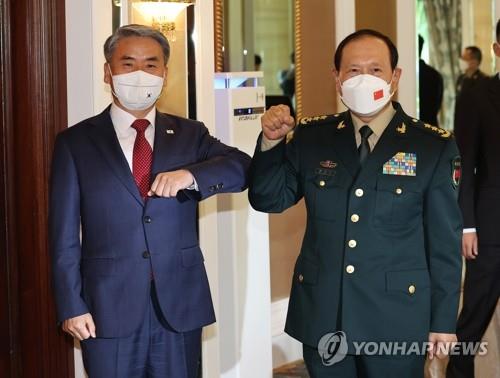