SEOUL, June 10 (Yonhap) -- South Korea on Friday asked Indonesia to quickly ratify their trade deal as they seek to strengthen cooperation on supply chains and other economic issues.

South Korea's National Assembly endorsed the Comprehensive Economic Partnership Agreement in June last year, which is meant to eliminate tariffs on products being traded with Indonesia. CEPA is equivalent to a free trade agreement but focuses on a broader scope of economic cooperation.

South Korea's First Vice Industry Minister Jang Young-jin made his case for a quick ratification of the trade deal to ensure companies of both sides can enjoy substantial benefits of the deal.

Jang made the remarks in a meeting with his Indonesian counterpart, Jerry Sambuaga, who was in Seoul as the head of an Indonesian trade delegation to a food fair in Goyang, just northwest of Seoul, according to the Ministry of Trade, Industry and Energy.

Trade between South Korea and Indonesia jumped 39 percent on-year to US$19.28 billion in 2021. South Korea's investment in the Southeast Asian country more than doubled on-year to $2.42 billion last year, according to the ministry.

In March, South Korea's Hyundai Motor Co. said it will produce the IONIQ 5 all-electric model in its first manufacturing plant in Indonesia. Hyundai Motor completed the 150,000 unit-a-year plant in the Deltamas industrial complex near Cikarang, 40 kilometers east of Jakarta, in December.

In a major investment, Hyundai is working with LG Energy Solution Ltd., South Korea's leading electric vehicle battery maker, to build a battery cell factory in Karawang, Indonesia, with a target to start production in 2024.

Jang and Sambuaga also reached a consensus on expanding trade and investment, and cooperating on supply chains.

The two countries are founding members of the Indo-Pacific Economic Framework, a U.S-led economic initiative meant to improve supply chain resilience and set rules for the digital economy, clean energy and decarbonization, among other things. 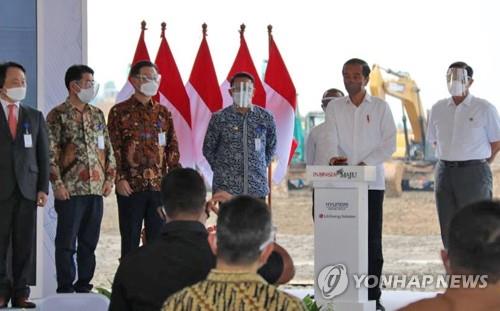