SEOUL, June 10 (Yonhap) -- A former U.S. Forces Korea base site near the office of President Yoon Suk-yeol opened as a public park on a trial basis on Friday, drawing crowds of people trying to get a first-hand look at the site that had been off limits to ordinary citizens for the past 120 years.

Yongsan Park has been under construction on the site previously used as USFK's Yongsan Garrison, as the USFK headquarters relocated to Camp Humphreys in Pyeongtaek, 70 kilometers south of Seoul. The government had initially planned to complete the park by 2027, but the plan has been postponed.

On Friday, part of the park opened to the public on a trial basis.

A 27-year-old who previously worked as a translator while serving his military service at the U.S. base welcomed the government's move to turn the base into a park.

"It is meaningful that the site has been returned to (Seoul) earlier than scheduled," Na Eui-hyun said.

A 71-year-old visitor, only identified by his surname Chang, said the visit was to satisfy his curiosity.

"Japanese people first used the site and then later U.S. soldiers have so far used it. I have been so curious how big the place is," Chang said.

Visitors should make online reservations in advance, and up to 500 people can visit the site per two-hour time slot and 2,500 per day.

The new Yoon Suk-yeol government relocated the presidential office from Cheong Wa Dae to the defense ministry compound in the Yongsan district in an effort to move out of a "symbol of imperial power" and get closer to the people. 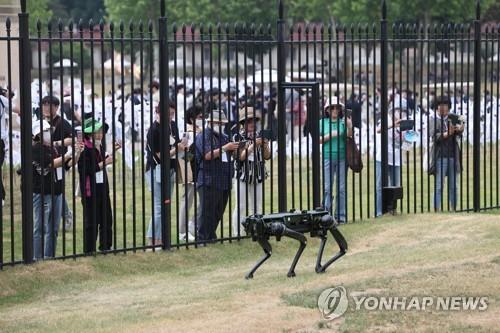