SEOUL, June 10 (Yonhap) -- When a team scores some dramatic goals in football, it can conveniently cover up some pressing issues at the other end.

Such was the case in South Korea's 2-2 draw against Paraguay in their pre-World Cup tuneup match Friday, when the Taeguk Warriors' shoddy transition defense was badly exposed.

With South Korea trailing 2-0 at Suwon World Cup Stadium in Suwon, some 35 kilometers south of Seoul, captain Son Heung-min ate into that deficit with a free kick goal on 66 minutes. Then substitute Jeong Woo-yeong came through with a last-second equalizer, as South Korea's pushback finally paid off. 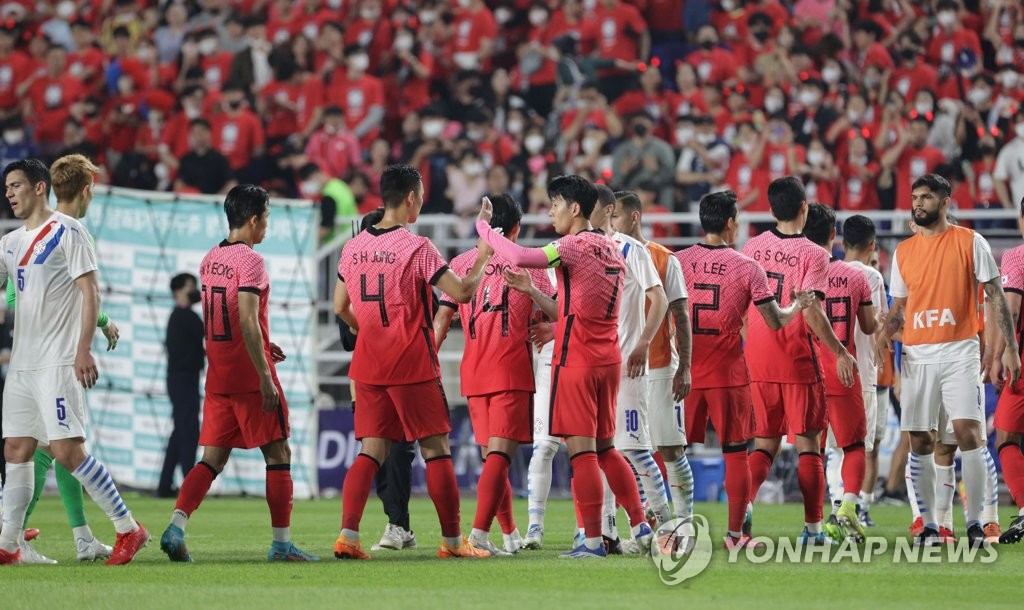 But as South Korea prepare for their 10th consecutive World Cup appearance, they must shore up their backline. It was clearly an issue in a 5-1 loss to Brazil on June 2 and even in a 2-0 win over Chile on Monday, South Korea were lucky to escape with the clean sheet.

The absence of their best center back, Kim Min-jae, due to an injury should no longer be a crutch, at least not against Paraguay, a team that came in ranked 50th in the world, 21 spots below South Korea.

If South Korea have trouble against Paraguay, which didn't qualify for the World Cup, then what chances do they have against Portugal, Uruguay and even Ghana at the big tournament in November?

Newcastle United midfielder Miguel Almiron had both of Paraguay's goals, and he took full advantage of the scrambling defense on counterattack opportunities. 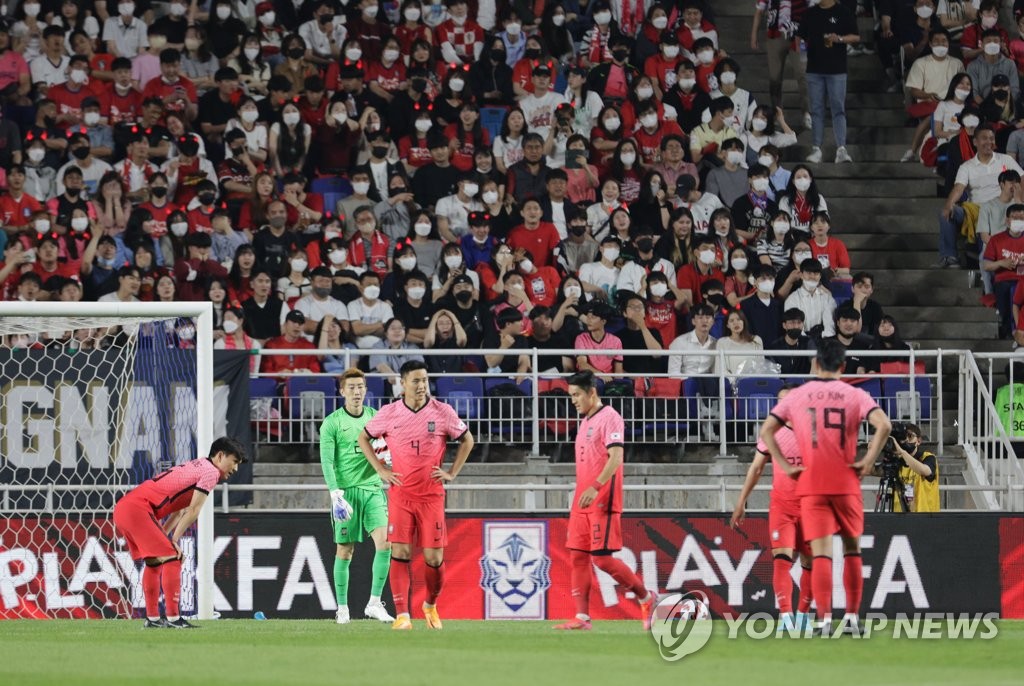 On the first goal, Almiron looked to have been beaten to the ball by center back Jung Seung-hyun. But as Jung bobbled the ball, Almiron quickly cut in front of Jung and rolled one into the low right corner.

Some five minutes into the second half, Almiron sped down the right wing on a fast break after a South Korean turnover in midfield. Amid some chaos in the South Korean box with defenders unable to find proper positions, Almiron curled one in with his left foot for a 2-0 lead.

Continuing his experiment with different lineup combinations, South Korea head coach Paulo Bento replaced five players from the Chile match. Notably, Paik Seung-ho got the start as the defensive midfielder in place of Jung Woo-young, who was dropped from the team Thursday with ankle and calf problems.

Paik is more of an offensive-minded midfielder than Jung. And instead of laying low to help out the four defensive backs, Paik often jumped into the attack and ended up getting caught in no-man's-land against Paraguay's speedy counterattacks. 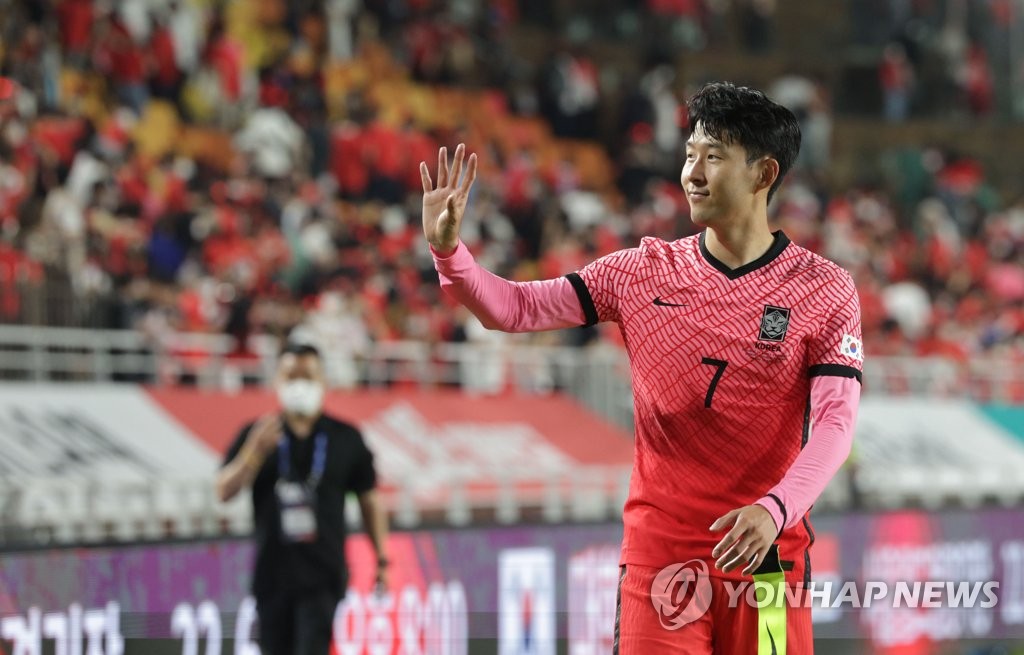 Paik was compelled to help out on the offense and create chances, because attacking midfielder Hwang In-beom, typically sharp with his playmaking, struggled against some physical play of Paraguayan midfielders.

Wingers Na Sang-ho and Kwon Chang-hoon had trouble feeding passes to Son, who started as a striker but who often moved down to midfield to secure the ball himself and create chances.

Some problems in the offensive process had a trickle-down effect on defense. Bento and his staff will take another crack at finding the right balance when they host Egypt in Seoul next Tuesday. 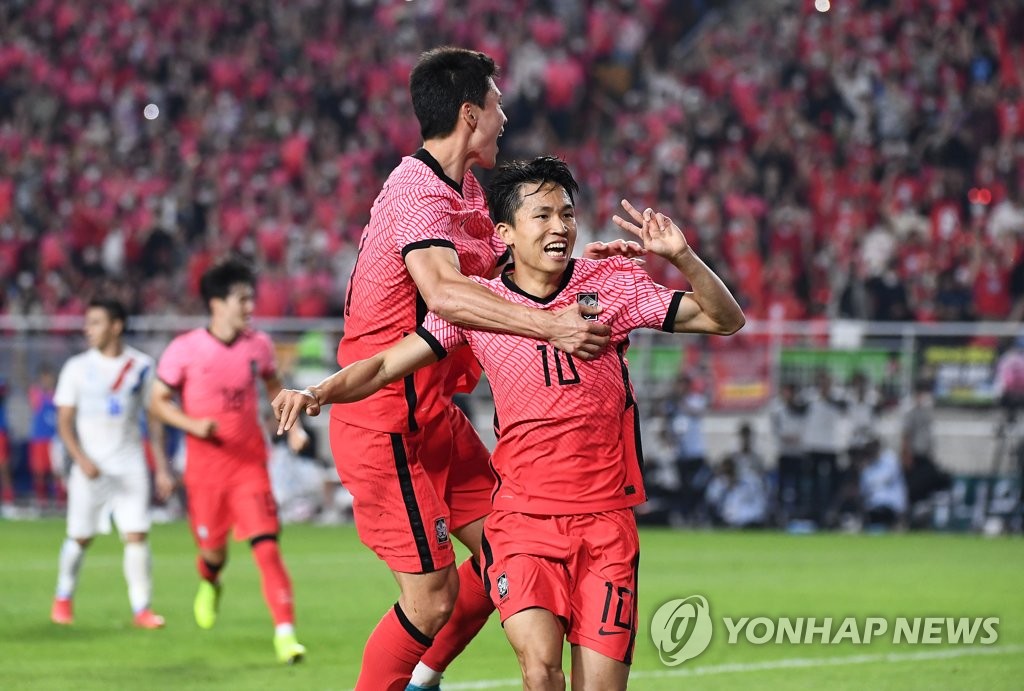