But there was no specific message issued from the fifth enlarged plenary meeting of the party's eighth Central Committee with regard to the possibility of the secretive regime carrying out another nuclear test.

The North stopped short of delivering new major messages toward the United States or South Korea through the three-day high-profile session that ended Friday.

It instead announced the promotion of Vice Foreign Minister Choe Son-hui, who used to play a key role in denuclearization talks, to the post of foreign minister. 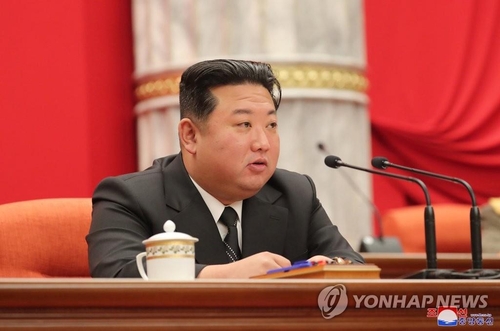 The North said that the right to self-defense is a matter of protecting national sovereignty, stressing that the security circumstance for the North is "very serious" and at risk of being further aggravated, according to the Korean Central News Agency (KCNA).

He then reaffirmed the principle of "power for power and head-on contest" and urged efforts to accomplish the goal of bolstering national defense capabilities "as soon as possible," the KCNA said.

"And he set forth the militant tasks to be pushed forward by the armed forces of the Republic and the national defense research sector," it added in an English-language report without elaborating.

A decision was made for the principles and strategies to be "maintained in the struggle against the enemy" and in the field of foreign affairs. The "enemy" appears to be referring to South Korea, with the expression used amid heightened tensions on the peninsula in June 2020 when the North unilaterally cut off all inter-communication lines.

The KCNA did not specify whether Kim made a direct mention of the North's reported plan for another nuclear test.

The South Korean government noted that the North's latest high-profile meeting chaired by Kim had focused on internal affairs, including economic recovery and the fight against COVID-19.

"In the midst of difficult situations at home and abroad, (it) placed a focus on creating a new momentum and boosting public support," the Ministry of Unification said in a press release.

The ministry also pointed out that the North has not mentioned any specific accomplishments in a drive for economic growth, which is understood to suggest a lack of tangible progress in related policies, except for the construction and agricultural sectors.

The ministry took note of new appointments to top positions, a move seen as aimed at strengthening the party's control and Kim's grip on power.

The North announced a partial reshuffle of top military officials. Ri Thae-sop was appointed chief of the General Staff of the Korean People's Army (KPA) and Jong Kyong-thaek as director of the KPA General Political Bureau, the KCNA said.

Kim was also quoted as saying during the session that the state anti-epidemic work has "entered a new stage" from a blockade-based prevention system to preventing the spread of the virus based on both a lockdown and eradication of the virus.
(END)