(ATTN: UPDATES with more details in paras 5, 21)
By Song Sang-ho

Lee Jong-sup and his U.S. and Japanese counterparts, Lloyd Austin and Nobuo Kishi, reached the agreement during their gathering held on the margins of the annual Shangri-La Dialogue in Singapore.

The first in-person meeting since November 2019 of the regional powers' top defense officials followed a series of North Korean ballistic missile launches. Speculation has also abounded that Pyongyang has completed preparations for a nuclear test.

They "agreed to conduct the South Korea-U.S.-Japan missile warning and ballistic missile search and tracking exercises," the ministry said in a press release. It did not specify when the training programs will take place.

The three sides have held the missile warning and tracking exercises every quarter and biennially, respectively, -- or at irregular intervals. Since 2018, the trainings have proceeded in a low-key manner, apparently to support efforts to engage the North in dialogue.

Those programs are now expected to take place "more publicly," a source said, a move that could help send a stronger warning signal to the recalcitrant North.

Washington has been striving to bolster trilateral security cooperation despite longstanding stand-offs between Seoul and Tokyo, mainly stemming from Japan's 1910-45 colonization of Korea.

"We should approach them in different ways," Lee told reporters.

They pledged that their countries will work closely together for the shared goal of achieving the complete denuclearization and lasting peace on the Korean Peninsula, and reaffirmed the importance of the "full" implementation of U.N. Security Council resolutions on the North, the ministry said.

"The three underscored the importance of continued international cooperation with the goal of deterring, disrupting and ultimately eliminating the North's illicit ship-to-ship transfers," the ministry said.

"The three expressed strong opposition to any unilateral acts that change the status quo and heighten regional tension," the ministry said. "The three underscored the importance of peace and stability in the Taiwan Strait." 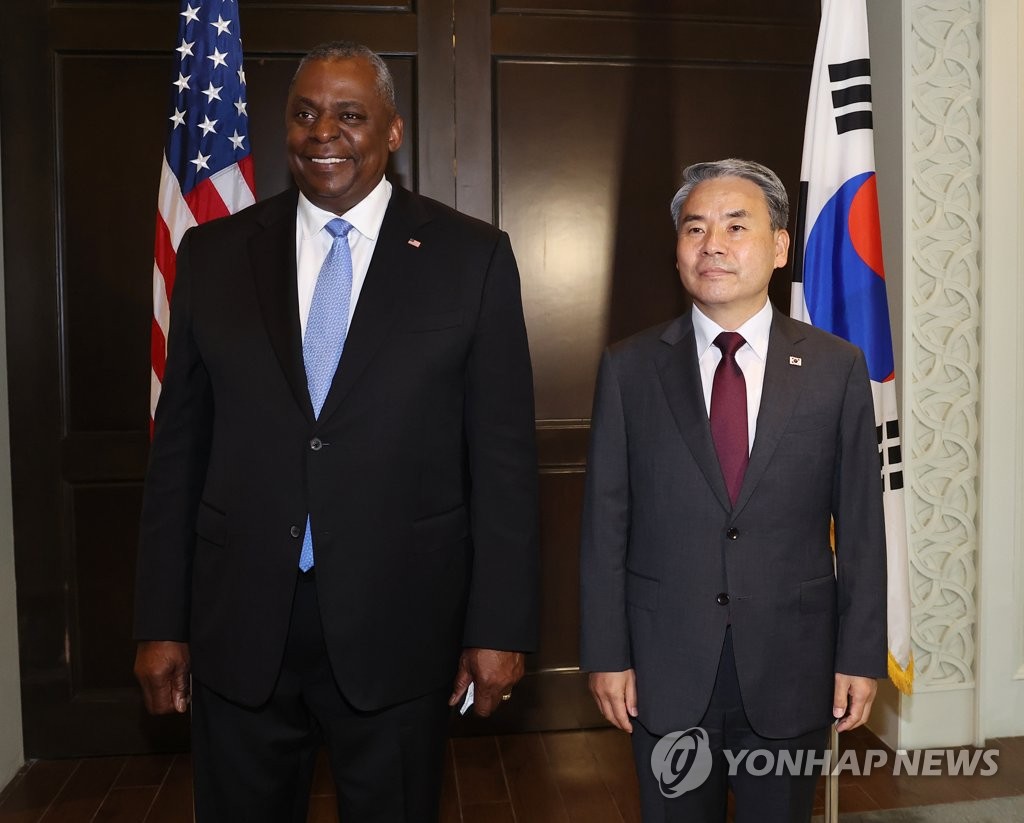 Prior to the trilateral session, Lee and Austin met bilaterally and discussed joint deterrence to counter North Korean threats.

"Basically, we discussed various ways to increase the enforceability of extended deterrence," Lee told reporters after the talks without elaboration.

Extended deterrence refers to America's stated commitment to mobilizing a full range of its military capabilities, including nuclear options, to defend its ally.

Lee and Austin also reiterated the two countries' commitment to expanding the scope and scale of combined military exercises and training as agreed upon during last month's summit between President Yoon Suk-yeol and his U.S. counterpart, Joe Biden.

Lee used the talks to stress the importance of joint efforts to reactivate the two countries' Extended Deterrence Strategy and Consultation Group, hold tabletop exercises on the use of deterrence assets and deploy U.S. strategic military assets in a coordinated, timely manner, according to the ministry.

The two sides also touched on the Ukraine issue. Austin mentioned Ukraine's shortage of weapons while thanking Seoul for sending aid to the war-torn country and for participating in enforcement of sanctions on Russia, a Seoul official told reporters.