SEOUL, June 13 (Yonhap) -- First lady Kim Keon-hee paid a visit to the widow of former President Roh Moo-hyun at her home in the southeastern village of Bongha on Monday.

Kim took a train to the village in Gimhae, about 300 kilometers southeast of Seoul, and stopped first at the grave of the late former president to pay her respects.

The visit was widely interpreted as the start of Kim's public activities, as she has largely kept a low profile since the presidential campaign.

Dozens of local residents welcomed the first lady with cheers and applause, prompting her to stop in her steps to acknowledge them with silent nods.

She then entered the home of Roh's widow, Kwon Yang-sook, and their meeting took place in private for about one and a half hours.

Roh was a liberal icon who took his own life in 2009 amid a sprawling corruption probe.

During the meeting, Kim said if Roh were alive, he would probably tell President Yoon Suk-yeol that he should be a president of unity, according to presidential spokesperson Kang In-sun. "Everybody liked Roh, who called for national unity," Kim added.

In response, Kwon said she feels sorry for not attending Yoon's inauguration ceremony due to health problems. "Those in the top seat cannot help but be rated and criticized. You'll need a lot of patience."

She then asked Kim to make all efforts to be faithful to her role as first lady.

Yoon told reporters earlier Monday to not read too much into the first lady's visit, saying it was something she had wanted to do since last year.

"She's been planning to visit since last year, but the schedule didn't work out, and now she's going," Yoon said as he arrived for work, when a reporter asked if he had sent a message in advance and whether the visit would mark the beginning of Kim's public activities.

"Why do you have to interpret everything in such a complicated way?" he quipped. 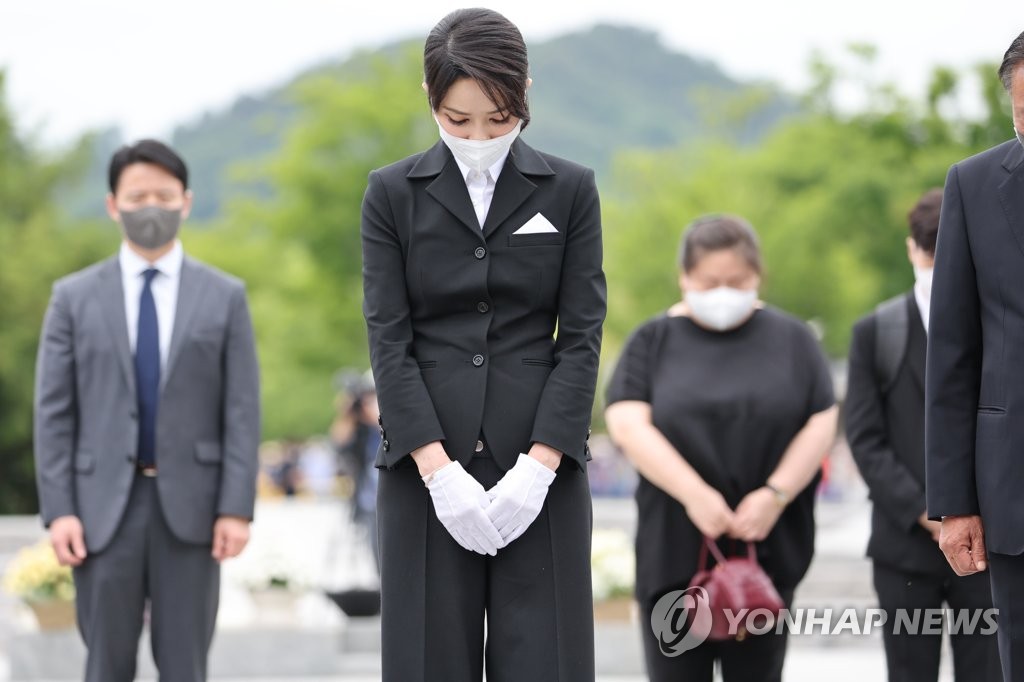